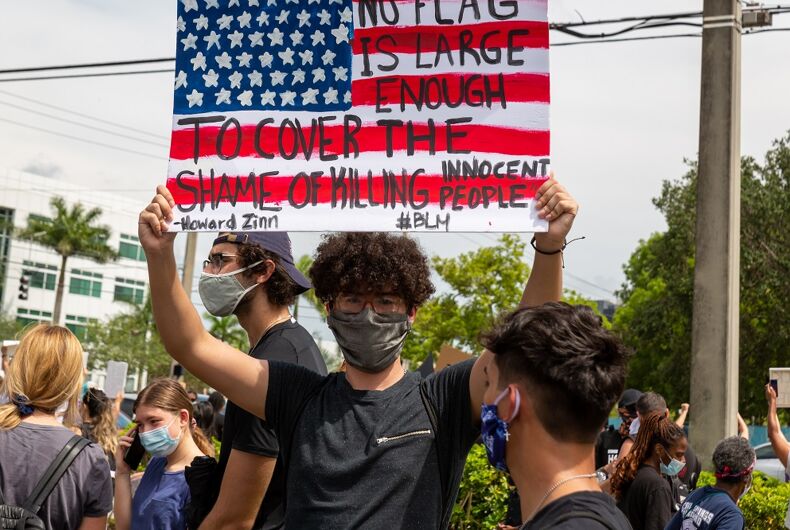 This Fourth of July, Americans are being forced to see the nation’s celebration for independence differently. The combination of the coronavirus pandemic – which has disproportionately affected Black Americans – and the ongoing protests in response to the police killing of George Floyd have brought attention to this nation’s centuries-old history of anti-Black violence.

The death of George Floyd appears to be an inflection point and wake-up call for white America.

Related: When a teacher assaults a teen who won’t stand for the Pledge of Allegiance, it’s not ‘patriotism’

The confrontation with Black Lives Matter protestors and police during this pandemic has created the perfect storm for America’s democracy to face its not-so-storied past. On the holiday today, most of us will be home with family and loved ones, in front of computers or televisions, watching fireworks exploding and people singing the “Star-Spangled Banner,” reciting the Pledge of Allegiance, or reenacting the Continental Congress of 1776.

However, what does this year’s Fourth of July mean to Black America?

The same question was asked on July 5, 1852, by Frederick Douglass. In his historic speech, “What, to the slave, is the Fourth of July?” he stated to a country in the throes of slavery the following: “What have I, or those I represent, to do with your national independence. … I am not included within the pale of this glorious anniversary! Your high independence only reveals the immeasurable distance between us. This Fourth of July is yours, not mine.”

A century-plus later, the “immeasurable distance” between Black and white America is revealed in every metric in society — health, wealth, education and employment, to name a few. The deleterious effects of 250 years of slavery and 90 years of Jim Crow followed by 60 years of “separate but equal” rule of law brought about the gaping disparities.

The core principles in American democracy stated in the Declaration of Independence are the unalienable rights of life, liberty, and the pursuit of happiness. It’s what Black America is still striving for peacefully.

However, the current civil unrest is a direct result of not being heard.

The Rev. Dr. Martin Luther King, Jr. said in his Montgomery Bus Boycott speech on December 5, 1955, “The great glory of American democracy is the right to protest for right.”

In 2016, San Francisco 49ers quarterback Colin Kaepernick protested against police brutality and racial inequality — the same protest that is now taking place on the streets of America and across the globe. Kaepernick kneeled instead of the mandatory standing during the national anthem. His action was called polarizing, un-American, and un-patriotic. But Kaepernick stood his ground and paid a steep price for his moral stance.

It was an act of patriotism.

The NFL and the Americans who opposed Kaepernick could never understand the lived reality Black and brown men face with police brutality, sometimes resulting in a death like that of George Floyd.

In 1968, Olympians Tommie Smith and John Carlos lifted their black-gloved fists as the national anthem played after they won the gold and bronze medals in the men’s 200-meter sprint — a gesture seen as radical and an endorsement of Black power.

When patriotism is narrowly defined, it can only be accepted and exhibited within the constraints of its own intolerance. That is, racism is baked in the story of American patriotism.

The U.S. national anthem is one of the quintessential symbols of American patriotism, for example. And the song is racist. The man who wrote the song was racist. The song wasn’t meant for all Americans when Francis Scott Key wrote the lyrics in 1814. Not only was slavery nearing its second century, but Key was also from a wealthy and influential plantation family in Maryland.

The song has a controversial third verse that was never sung at events or ceremonies because it was offensive — especially after the Civil War ended in 1865. The verse stated the following: “No refuge could save the hireling and slave/From the terror of flight or the gloom of the grave.”

Key’s love for America is a patriotism that doesn’t include Black Americans — the enslaved people whose force labor built the country he so revered. Centuries later, Black expressions of patriotism are still denounced if they oppose the status quo, as defined by Donald Trump and his MAGA rallies.

True acts of patriotism — not those hijacked or censored by racists or those in power — courageously dissent against popular beliefs and rituals.

“Give me liberty or give me death,” he said in his famous 1775 speech for American independence. He opened the speech by explaining how he views patriotism differently from others.

“No man thinks more highly than I do of patriotism… I shall speak forth my sentiments freely and without reserve. This is no time for ceremony. The questing before the House is one of awful moment to this country.”

“I consider it as nothing less than a question of freedom or slavery; and in proportion to the magnitude of the subject ought to be the freedom of the debate. It is only in this way that we can hope to arrive at truth, and fulfill the great responsibility which we hold to God and our country. Should I keep back my opinions at such a time, through fear of giving offense, I should consider myself as guilty of treason towards my country, and of an act of disloyalty toward the Majesty of Heaven, which I revere above all earthly kings.”

The kind of patriotism Patrick Henry discussed allowed for marginalized voices to participate in a thriving democracy.

Democracy can only begin to work when those relegated to the fringes of society can begin to sample what others take for granted as their inalienable right. It’s the patriotism Kaeperneck exhibited at NFL games — now seen on the streets of America — that we need more of.