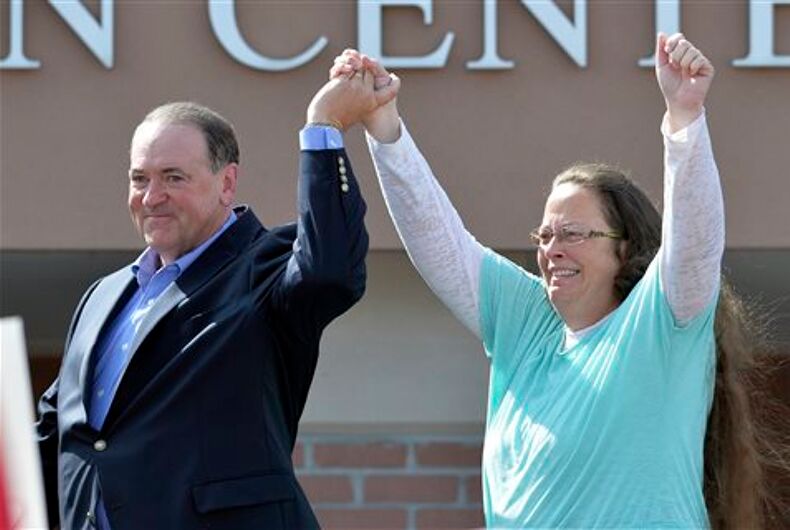 Moreover, he said that it’s Christianity’s fault that those dastardly LGBTQ people are getting so much acceptance.

“The biggest threat to biblical principles today is the failure to apply a biblical standard of maleness and femaleness,” he told The Christian Post. “We are creating this illusion that there is no gender, there is no identity, and I’m blaming the Christian Church.”

He traced a strange history of LGBTQ rights that starts in 1970, when California legalized “no-fault” divorce in a law signed by then-Governor Ronald Reagan.

No-fault divorce means that spouses don’t have to prove wrong-doing to get a divorce, which conservative Christians have complained about for decades because it makes getting a divorce easier.

Huckabee said that this law showed that marriage “wasn’t really that important” and that people “could go in and out of it without a second thought.”

“That’s when we first started losing that sense of sacredness of what marriage meant,” he said.

Huckabee is a fawning supporter of Donald Trump, who has been married multiple times.

How does this relate to LGBTQ rights, when marriage equality advocates spent decades arguing about how important marriage is?

“So I’m not really that surprised that same sex-marriage has become in vogue because the Christian Church were the ones who essentially abdicated a strict responsibility about what biblical marriage should look like,” he said, even though divorce is mentioned multiple times in the Bible.

“Once you’ve destroyed that, why can’t you have any and everything?” he said. “The gender dysphoria we’re seeing today is largely due to the fact that the Church has failed to present very clearly the words of Jesus and Genesis 5:2: ‘Male and female He created them.’”

He went on to say that Christians are worried about not being “politically correct” today, and that they worry about being “Biblical” because it will “alienate” people.