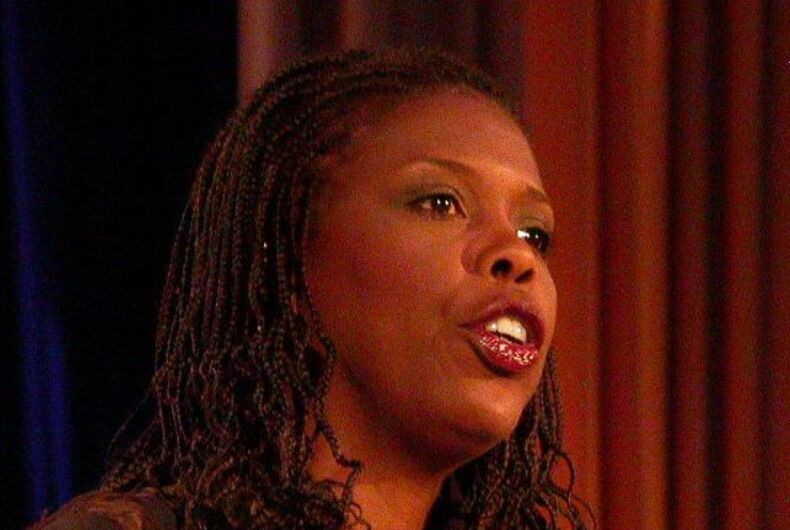 Rightwing pundit Star Parker said recently that the “B” in “LGBTQ” stands for “bestiality.”

Parker was on “Vocal Point,” a Christian radio show hosted by Jerry Newcombe, when she got into an explanation of what “LGBTQ” means.

She said that “We did the ‘L’ and ‘G'” when the Supreme Court legalized marriage equality in all 50 states in its 2015 Obergefell decision.

The “Q,” she said, refers to “questioning,” which she said is the reason “all the textbooks” are being changed, so that kindergarteners believe that they’re questioning if they don’t know their sexual orientation.

But her description of “B” was the most outlandish. “But notice they skipped over the ‘B,’ and there are some that say this ‘B’ is going to bombard us with real vileness in our society if they get what they want because it’s not about bisexuality, it’s about bestiality,” Parker said.

Newcombe asked her to clarify. “You’re not saying, though, that officially the ‘B’ in ‘LGBTQ’ stands for ‘bestiality’?” he asked.

Parker responded, “We don’t know.” She said that “they said” that the “Q” originally meant “queer,” but now “we found out” it means “questioning.”

“We do know that there has been discussion about bestiality in their closed doors,” she continued, not specifying which “closed doors” she was referring to.

“So I’m just saying, don’t be surprised if we find out that ‘B’ is not what they said publicly.”

Parker has a long history of opposing LGBTQ equality. Last year, she compared the rainbow flag to the Confederate flag.

Two years ago, she said that the “homosexual activist community” was trying to “expand all entitlements,” when she was referring to anti-discrimination policies.

And just several weeks ago she compared LGBTQ activists to Nazis:

It shouldn’t surprise us, then, that Gay Pride Month has become a time for LGBTQ storm troopers to pursue political enemies. Not much different from the infamous Kristallnacht in Nazi Germany, when Nazi brown shirts took to the streets to smash windows of shops owned by Jews.

Why is the New York Times joking that Trump & Putin are gay lovers?