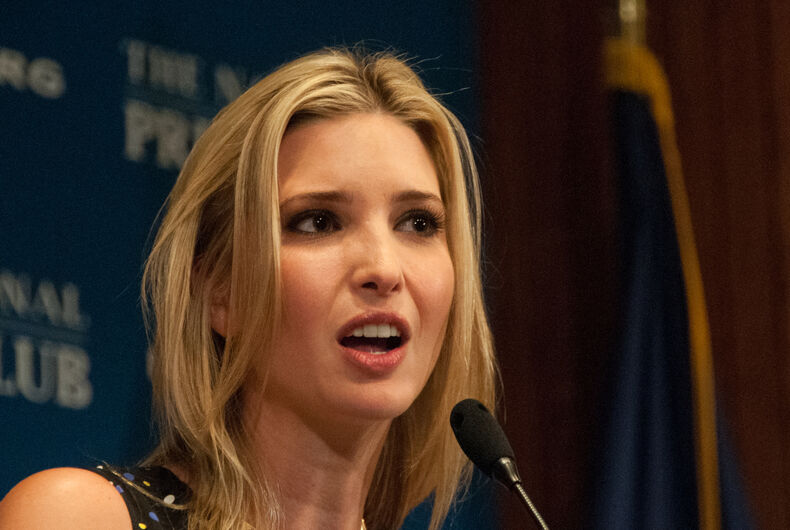 Ivanka Trump, Donald Trump’s daughter, donated $50,000 to a church in Texas that has a history of anti-LGBTQ activism.

Last week, CBN News reported that an anonymous source said that Trump gave $50,000 to the Prestonwood Baptist Church in Plano after she read a tweet that said that the church wanted to help immigrant children.

Now Graham has confirmed that the donation was made. “I’ve had the opportunity to meet with Ivanka Trump a number of times over the last year, and I’ve been struck by her kindness and concern for those in need,” Graham said.

While the church is possibly doing commendable work for immigrant children, it also has a history of anti-LGBTQ activism. The church’s website calls being LGBTQ “Sexual Identity Confusion.”

The site also says that “sexual identity” – which includes both gender identity and sexual orientation – is “fixed in us at our creation” and is not an “individual choice.” While it notes that not all LGBTQ people are in “rebellion against God’s design,” it says that homophobia and transphobia “are motivated by truth and love, not ignorance or hate.”

While not laying out a specific form of conversion therapy, the church advocates finding “sexual wholeness,” which it uses as a euphemism for being straight and cisgender.

In 2015, Prestonwood helped lead the fight to repeal the Equal Rights Ordinance in Plano, which added sexual orientation and gender identity to the city’s anti-discrimination policy. The city’s council voted 5-3 in favor of the ordinance, and a coalition of conservative Christian churches tried to get it repealed through a ballot measure.

“The pulpits must be aflame with God’s truth and righteousness in calling openly and strongly for every voter to be faithful to this basic duty of stewardship,” said one of the group’s email blasts.

In reaction to the 2015 Obergefell decision that required all states to recognize marriage equality, the church’s pastor Jack Graham wrote an angry column.

“This past week, the family once again came under attack in America,” he wrote. “This is an old fight dating back to the Garden of Eden when Satan seduced the first family with lies and deception. The same lies are in play today.”

“The biblical design of marriage is clear: a man and a woman living and loving together in a monogamous relationship in the image of God. Today, same-sex marriage is at the forefront of the fight for the biblical family. Gay marriage violates God’s standard and is outside God’s plan for men and women.”

One of the primary reasons I along with millions of Christians support @realDonaldTrump @POTUS https://t.co/pa35ELx9db

This kind of stuff should encourage believers to consider Christian education or homeschooling https://t.co/VbtgIfawR6

Transgenderism will continue to be an issue in the US as it is increasingly in Western Europe. Sexual identity must be addressed in the pulpit and our churches https://t.co/RKJp8WeJyy

While Graham tweeted last week that the church is “working to provide solutions to care for children during this terrible immigration crisis,” he did not specify what those solutions are.

We @Prestonwood are currently working to provide solutions to care for children during this terrible immigration crisis. Our Espanol ministry let by Gilberto Corredera is stepping up to the challenge to express the love of Jesus. We are broken-hearted and determined to act

He also tweeted support for Donald Trump’s efforts to increase arrests of refugees who are seeking asylum in the U.S., a policy that has led to the separation of children from their parents. While Trump “reversed” his policy, he is now locking children up with their parents in detention instead.

Thank you Mr President @POTUS for responding to the immigration crisis with compassion and conviction. Your commitment to American values and security displays the character of your presidency

This small town mayor & his husband got drunk at Pride. Then they got arrested.