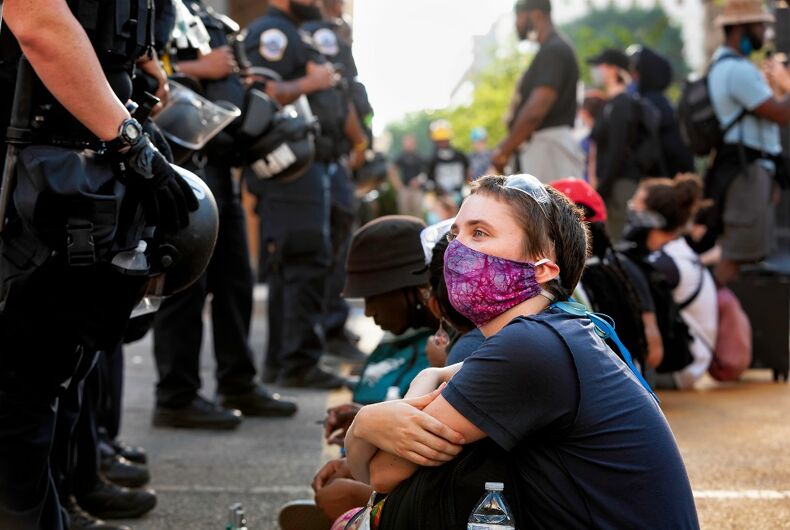 Police face off against protestors at a June 23, 2020 demonstration in D.C.Photo: Shutterstock

Why has the video exposing the brutal inhumane execution of George Floyd – an unarmed black man killed by Minneapolis police officers, one of whom pressed his knee on Floyd’s neck for eight minutes and 43 seconds while Floyd gasped repeatedly “I can’t breathe” – provoked the current inflection point throughout the U.S. and other countries across the planet to demand the defunding of police departments?

Why has it excited a mass confrontation of our collective longstanding systems of institutional and societal racism? Was it the video itself?

For decades, though, we have seen videos of police brutalizing people of color and specifically Black people: children sprayed with the full force of police water cannons in the 1960s; the terrifying attack by Los Angeles police officers on Rodney King; and the killings of Michael Brown in Ferguson, Freddie Gray in Baltimore, Erick Garner on Staten Island, Tamir Rice in Cleveland, Walter Scott in North Charleston, Laquan McDonald in Chicago, Alton Sterling in Baton Rouge, Philando Castile in St. Paul, Stephon Clark in Sacramento… to name a few.

Systemic racism made visual has had a profound impact on mass movements for social change during the Civil Rights Movement of the 1950s through the 1970s forward and on the contemporary Black Lives Matter movement.

While people of color do not need to be reminded of the impact of racism on their lives on a daily basis, why now have white people come out in such large numbers in protest in solidarity? Why have politicians, many who were reluctant to speak out earlier, proposed and offered their support for legislation to address systemic racism in police departments?

Why are we now seeing Confederate statues coming down, name changes proposed for military bases carrying the moniker of Confederate war generals, Confederate flags banned at sporting events such as NASCAR, and other significant changes?

Possibly the senseless murder of George Floyd in all its graphic details was the proverbial straw that broke white people’s denial of the profound legacy of racism. Possibly it was the incident that exposed the myth of the “bad apple” theory of one or two bad police officers or departments being the problem. Possibly watching the brutality by George Floyd layered on top of all the other incidents brought white people to that critical mass of understanding.

Maybe it was because so many white people were watching TV and internet videos while isolating – and unemployed – because of the current pandemic and recession?

Or maybe, just maybe, it is something more. Maybe they finally believed that it is in their own self-interest to challenge racism.

And what could be white people’s self-interest?

Well, for one, maybe white people saw in the treatment of George Floyd their own fears of being mistreated by police. Or many may have realized that they lose a piece of their humanity whenever they fail to intervene.

They may also realize that racism comes between people by destroying friendships and family relationships. It also perennially exposes to the world that the United States still has a very long way to go to ensure the “freedom and liberty” it has promised ever since Thomas Jefferson penned his words declaring:

We hold these truths to be self-evident, that all men are created equal, that they are endowed by their Creator with certain unalienable Rights, that among these are Life, Liberty and the pursuit of Happiness.

White people could also be coming to an understanding that racism makes bad economic sense for large corporations and smaller businesses alike by restricting or limiting potential markets and customers. For example, some corporations like Coca-Cola, Verizon, and Unilever are dropping their advertising from social media platforms such as Facebook because of rampant hate speech.

Bell asserted that the Supreme Court ended the longstanding policy in 1954 of “separate but equal” in Brown v. Board of Education because it presented to the world, and in particular, to the Soviet Union during the height of the cold war, a United States that supported civil and human rights.

Let’s take another example: the Church of Latter-Day Saints (LDS) president, Brigham Young, instituted a policy on February 13, 1849, emanating from “divine revelation” and continuing until as recently as 1978 forbidding the ordination of Black men from the ranks of LDS priesthood.

This policy prohibited Black men and women from participating in the temple Endowment and sealings, which the Church requires for the highest degree of salvation. The policy likewise restricted Black people from attending or participating in temple marriages.

Young attributed this restriction to the sin of Cain, Adam and Eve’s eldest son, who killed his brother Abel.

“What chance is there for the redemption of the Negro?” stated Young in 1849 following the declaration of his restrictive policy. “The Lord had cursed Cain’s seed with blackness and prohibited them the Priesthood.”

The twelfth LDS Church president, Spencer W. Kimball, who served from 1973 to his death in 1985, was supposedly touched with a vision, and he reversed the ban, referring to it as “the long-promised day.”

Well, we can ask today whether “revelation” or interest conversion was the determining factor in granting black people full membership rights in the Church at a time of ongoing and heightened civil rights activities in the United States and an increase in LDS missionary recruitment efforts throughout the African continent.

In another example, the issue of slavery became a lightning rod in the 1840s among members of the Baptist General Convention, and in May 1845, 310 delegates from the Southern states convened in Augusta, Georgia to organize a separate Southern Baptist Convention on a pro-slavery plank. They asserted that to be a “good Christian” one had to support the institution of slavery and could not join the ranks of the abolitionists.

Well, again, whether by divine inspiration or interest convergence stemming from political pressure and shrinking church membership, 150 years later in June 1995, the SBC reversed its position and officially apologized to African Americans for its support and collusion with the institution of slavery (regarding it now as an “original sin”), and also apologizing for its support of Jim Crow laws and its rejection of civil rights initiatives of the 1950s and 1960s.

Frederick Douglass, who escaped enslavement and worked for the cause of liberation for the remainder of his life, described the dehumanizing effects of slavery not on the enslaved alone, but also on white slavers whose position to slavery corrupted their humanity.

While the social conditions of Douglass’s time were very different from today, nonetheless, Douglass’s words hold meaning by analogy: “No man can put a chain about the ankle of another man without at last finding the other end fastened about his own neck.”

It cannot be denied that racism has served white people by affording them great advantages and privileges throughout the centuries. Eventually, however, systemic racism has backfired, and the chain has taken hold of them.

The meaning is quite clear: When any group of people is targeted for oppression, it is ultimately everyone’s concern. We all, therefore, have a self-interest in actively working to dismantle all the many forms of oppression, including racism.

I believe we are all born into an environment polluted by racism (among all the many forms of oppression), which fall upon us like acid rain. For some people, spirits are tarnished to the core, others are marred on the surface, and no one is completely protected.

Therefore, we all have a responsibility, indeed an opportunity, to join together to construct protective shelters from the corrosive effects of racism while working to clean up the racist environment in which we live. Once we take sufficient steps to reduce this pollution, we will all breathe a lot easier.

No one ever again will have to plead “I can’t breathe” at the hands (and knees) of police officers.