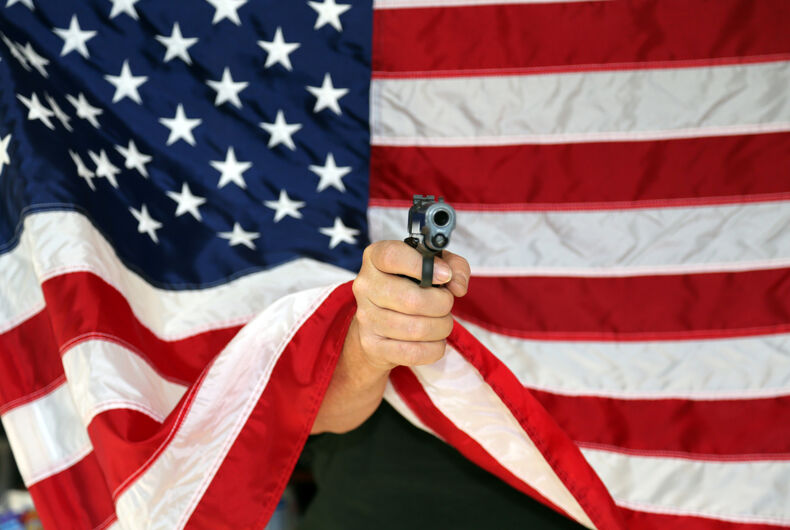 America’s foundation of white supremacy and its deeply-seeded culture of firearms have, since its inception, resulted in perpetual injustice for people of color.

White supremacy is a nationalistic philosophy in which “race” is defined in relatively narrow binary terms of “white” versus racialized others. The legacy of white supremacy benefits not only those who fully embrace it, but also those who accept their unearned privileges based solely on their socially-constructed racial designation.

Europeans established their domination of the Americas based on a program of exploitation, violence, kidnapping, land theft, and genocide against indigenous populations. For example, the Puritans left England for America to practice their form of Protestant Christianity.

They believed they were divinely chosen to form “a biblical commonwealth” with no separation between religion and government. They tolerated no other faiths or interpretations of divine precepts. In fact, they murdered and expelled Quakers, Catholics, and others.

[N]o negroes, mulattos or Indians, Jew, Moor, Mahometan [Muslims], or other infidel, or such as are declared slaves by this act, shall, notwithstanding, purchase any christian (sic) white servant….

In 1790, the newly constituted United States Congress passed the Naturalization Act, which excluded all nonwhites from citizenship, including Asians, enslaved Africans, and Native Americans, the later whom they defined in oxymoronic terms as “domestic foreigners,” even though they had inhabited this land for thousands of years.

Congress did not grant most remaining Native Americans citizenship until 1924 with the passage of the Indian Citizenship Act, though Asians continued to be denied naturalized citizenship status.

An example of “cultural genocide” can be seen in the case of white Christians dominating over indigenous peoples, who they saw as “godless heathens” and “devil worshipers.”

White Christians attempted to destroy indigenous peoples cultures through many means: confiscation of land, forced relocation, undermining of their languages, cultures, and identities, forced conversion to Christianity, and the establishment of Christian day schools and off-reservation boarding schools far away from their people.

Throughout U.S. history, rather than characterizing refugees and refugee issues in humanitarian terms, many conservative and nationalist activists use narratives representing refugees as invading hoards, as barbarians at the gates who, if allowed to enter, will destroy the glorious civilization we have established among the “lesser” nations of the Earth.

On a more basic and personal level, the rhetoric of invasion taps into psychological fears, or more accurately, terrors of infection: our country, our workplaces, and more basically, our private places in which “aliens” forcefully penetrate our bodies, into our orifices, and down to the smallest cellular level.

Modern day white supremacists and neo-Nazis believe that only white Anglo-Saxon Protestant heterosexuals have been granted a soul by God. Everyone else they refer to as “mud people,” those without a soul and without meaning, value, or worth.

As hundreds of white nationalists lined the streets of Charlottesville, Virginia on August 12, 2017 to protest the removal of a statue of Confederate Gen. Robert E. Lee from Lee Park, some waved Confederate and Nazi flags, brandished shields, and marched with burning torches. They shouted racist and anti-Semitic slurs repeating “JEWS WILL NOT REPLACE US!” At one point, they loudly chanted in unison: “FUCK YOU FA***TS!”

What these white, mostly male, presumably heterosexual protesters have in common is a belief in a “white ethno-state,” according to Southern Poverty Law Center Research analyst Keegan Hankes. He referred to the so-called “alt-right” or far-right movement as a “grab bag of right-wing ideologies.”

Though Latinx represent 16% of the adult population in the U.S., they accounted for 23% of inmates in 2017.

The United States leads all other countries in the rate of private gun ownership with 120.5 of civilian guns per 100 people.

“Mass shootings at predominantly white schools draw the most attention from journalists and lawmakers, but The Post has found that children of color are far more likely to experience campus gun violence — nearly twice as much for Hispanic students and three times for black students,” a March 23, 2018 article in the Washington Post read.

White supremacy and systemic racism, the climate and promotion of violence and mass incarceration, and the culture of firearms continue to conspire in denying justice under the law to people of color in the United States.

Maybe with the recent brutal high profile murders by police officers of Breonna Taylor, George Floyd, and Rayshard Brooks, the United States and its people have reached an inflection point to usher in real, deep, and lasting systemic change between law enforcement agencies and the communities they are meant to serve, changing police from warriors over the people into guardians of peace, safety, and equality for all.