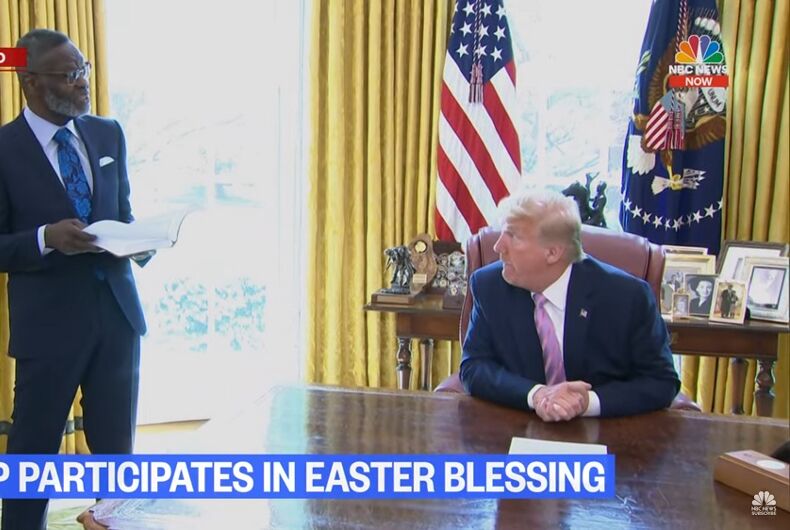 Donald Trump invited a virulently anti-LGBTQ pastor to deliver an Easter blessing from the White House this past Friday.

Bishop Harry Jackson has gotten national media attention since 2012 for his opposition to LGBTQ rights and extreme statements, which include saying that LGBTQ people are “folks who cannot reproduce who want to recruit your kids” and said that the movement for marriage equality proved that the U.S. was “just like during the times of Hitler.”

#Homosexuality does not reproduce they can only recruit #vote2012 #marriage #votevertical #ccot #tcot http://t.co/GKVAzjbJ

#LGBT activists aim is not just=rights but special rights that surpass the rights of every other group in the nation.Now, that’s NOT #love!

Wht #LGBT activists want is 2 make any disapproval of their #sexual choices a #crime #marriage http://t.co/GKVAzjbJ

The list could go on – Jackson has spent the better part of a decade speaking in mainstream media and at conservative Christian events making extreme statements about LGBTQ people.

But apparently his statements weren’t too extreme for the Trump administration. On Friday, he delivered the Easter Blessing from the White House, standing three feet away from Trump for social distancing. Trump introduced him as a “highly respected gentleman.”

Jackson thanked Trump and Pence for their efforts “to protect our nation” from coronavirus.

“You’ve included the churches in your relief efforts,” Jackson told Trump, referring to the CARES Act Congress passed late last month. “Many churches would have had to close down had it not been for your insightful leadership. So thank you both.”

He then read from the Bible and prayed with Trump and Mike Pence. Trump called his blessing “beautiful.”

We still don’t have our LGBTQ rights. What are we going to do about it?