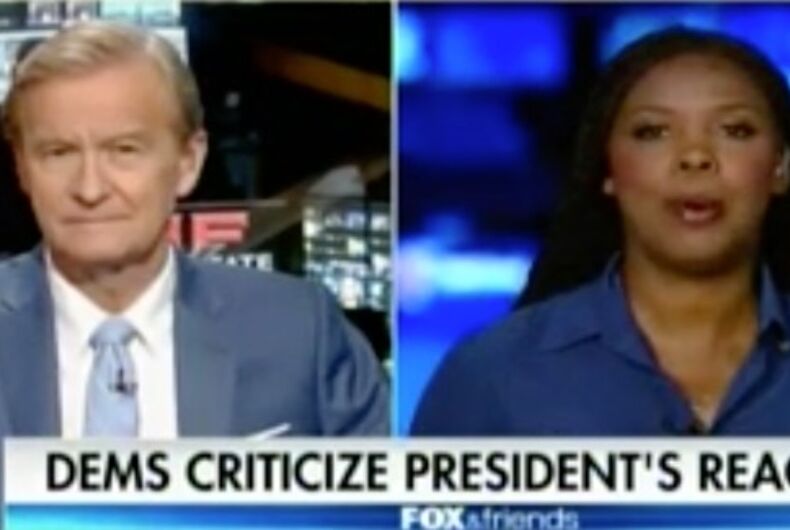 Steve Doocy and Star Parker on Fox and FriendsPhoto: screenshot

Fox News pundit Star Parker is apparently not the brightest bulb in the pack. The Fox News pundit appeared on Fox and Friends this morning and made one whopper of a claim.

“It shouldn’t take the president of the United States two days to summon the basic decency to condemn murder and violence by Nazis and white supremacists,” Pelosi said.

“You know what’s really interesting and really incredible irony here is the same people that are demanding that the Confederate flag comes down are the same people that are insisting that the rainbow flag goes up,” Parker replied. “These two flags represent the exact same thing. That certain people groups are not welcome here. So if Nancy Pelosi wants to say that we’re going to start shutting down First Amendment rights of a certain group of people, then what happens the next time that the homosexuals want to walk through an American city and protest and counter protesters come out?”

That’s right. A black pundit is claiming that the rainbow flag – a symbol of inclusion and human rights – is the same as the Confederate flag that symbolized slavery and white supremacy. Apparently she is also unaware that most pride parades draw religious conservatives who stand on the sidelines wishing death upon the community and shouting hate speech.

Parker, a failed Senate candidate and syndicated columnist is known for her ludicrous anti-LGBT claims like same-sex marriage is one sign that “we are sick as a country” and this isn’t the first time she’s compared slavery with LGBT rights.

How sad that some people can’t get over their own personal prejudices to see that the people who hate one minority group generally have no problem despising others as well. Parker may make her living apologizing for white nationalists and conservative politicians, but the cost was her dignity.

Watch video of the exchange below courtesy of our friends at Media Matters.