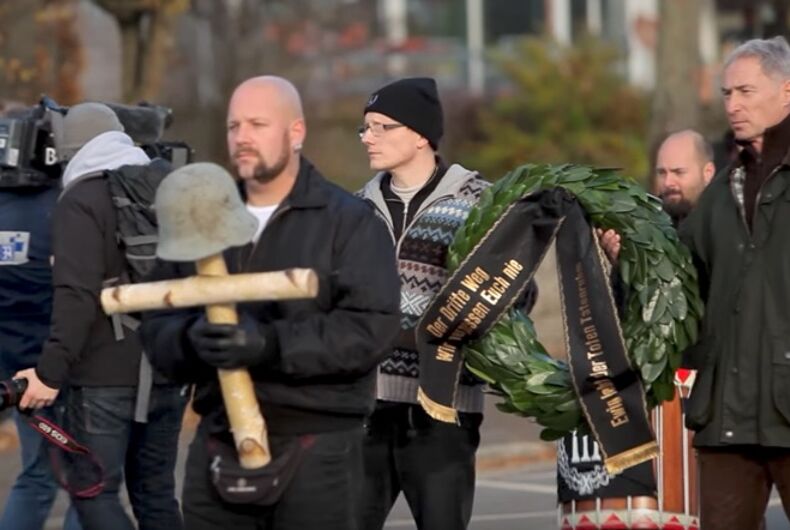 German neo-Nazis march through the streets of Wunsiedel in Bavaria.Photo: screenshot

While the nation has reacted with horror to the Charlottesville, VA neo-Nazi/white nationalist march that left three people dead, countries in Europe have been dealing with the hatemongers for decades. In 2013, one small town in Bavaria came up with an ingenious way to fight back that could easily be used in America as well.

They tricked the neo-Nazi marchers into raising money to fight Nazis and the participants didn’t realize it until they were already on the move and it was too late to stop.

The town of Wunsiedel has dealt with neo-Nazis marching through their town for decades now. Hitler deputy Rudolf Hess was once buried there and even though his remains have been exhumed and the grave destroyed in an attempt to stop the marchers, the bigots have continued to return.

Then the town came up with a creative way of fighting back. They sponsored the 250 marchers like a charity walkathon. For each meter the walkers move forward, €10 is donated to a group called EXIT Deutschland that helps people escape from extremist groups. The citizens of Wunsiedel raised €12,000 for the program in 2013.

The town even mocked the marchers as they paraded through the streets by posting signs along the route with slogans like “If only the Führer knew!” One sign, “Mein Mampf” (my munch), was put next to a table full of bananas to keep the marchers on their feet so they raised more money.

At the end of the march, the neo-Nazis were greeted with a large sign thanking them for raising the money to fight their own bigotry.