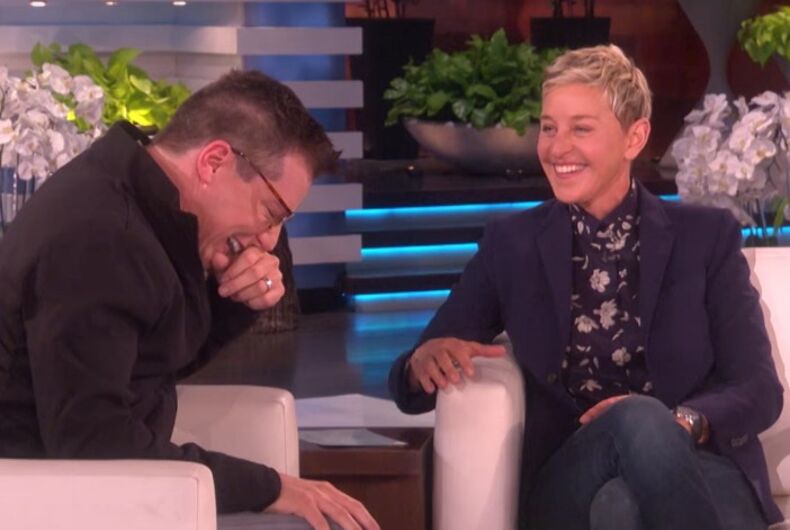 Ellen and Sean Hayes, having a laugh in front of millions of viewers.Photo: Screenshot/YouTube

The backlash against Ellen coming out on her sitcom 20 years ago, fortunately, did not make her at all shy about addressing LGBTQ issues on her daytime talk show.

Here are our top ten favorite LGBTQ moments on The Ellen Degeneres Show in 2018.

And when you’re done watching these clips, check out our list from 2017.

10. Ellen asks Cher if she ever slept with a girl

Ellen and Cher had a lot of fun this past September, and Ellen tried a little “girl talk.”

And girl talk with America’s most famous lesbian of course entailed asking Cher if she ever slept with a woman.

“So it’s just me?” Ellen asked the room when Cher said “No.”

9. Ellen talks to the first gay Navy Spouse of the Year

Some of Ellen’s best moments is when she talks to LGBTQ people who aren’t famous, shining a light on our love, and sometimes our fight for equality.

She talked to the first gay Navy Spouse of the Year and his husband, Brian and Matthew Alvarado, who described themselves as “just a sailor and his spouse.”

The book is a sign of how straight liberals are less likely to run away from LGBTQ equality in 2018 – to tell us to be quiet or else they’ll lose elections – and instead embrace it as part of their critique of movement conservatism.

So of course Ellen wanted to get on board.

7. Ellen talks to a gay student whose parents rejected him

Ellen didn’t shy away from showing the effects homophobia this past year.

Students going to college know that the school calculates their family’s contribution based on their parents’ incomes, with the assumption that parents generally want to help their kids succeed.

That much can’t always be said about the parents of LGBTQ people. Seth Owen’s parents rejected him when he refused to go to conversion therapy, so he had to crowd-fund money to go to college.

Remember how Adam Rippon was everywhere after the Winter Olympics? And it looked like he was going to get some kind of regular deal on Ellen’s show, since he was there so much anyway?

That cultural moment provided a lot of television gayness, including this segment where Ellen constructed Rippon’s dream man.

It was a little weird – and not all that funny – but it’s hard to imagine a gay boy’s sexual attraction to other men being portrayed as normal and healthy in mainstream media just a couple decades ago.

Ellen loves games, and she and RuPaul concocted one that combined bringing drag culture to straight people and making men dance.

4. Ellen plays a very bisexual “Who’d you rather?” with Demi Lovato

“Who’d you rather?” might seem like a silly, adolescent game, but considering how rare it is to see bisexual people acknowledged as bisexual in the media, this segment was noteworthy.

Ellen asked singer Demi Lovato who she would rather… well, they didn’t say exactly. Ellen went through a long list of celebrities, both men and women.

Neither woman stopped to explain that Lovato is bi – it was just obvious to anyone watching.

3. A trans man who has never met another trans person gets to meet Laverne Cox

Some of Ellen’s best moments from this past year weren’t on her show proper, but on her web series Fearless.

This clip highlighted the isolation LGBTQ people can face as they grow up surrounded by straight and cis people. Rickey had never met another transgender person… until he got to meet actress Laverne Cox.

2. Ellen talks to a guidance counselor who was fired for being gay

Shelly Fitzgerald was fired from her job at a Catholic high school in Indiana, and Ellen wanted to meet her… and the students who were standing up for her.

Fitzgerald didn’t even come out on the job, but was outed by her administration.

Education remains a field awash in anti-LGBTQ discrimination, and kudos to Ellen for showing America that it’s not OK to love queer people when we’re TV but then try to keep us away from children when we are called to teach.

1. Ellen and Sean Hayes face off in a “Battle of the Gays“

Ellen’s coming out may have made her one of the most admired people in America, but she isn’t the only person who played a gay character in a primetime sitcom in the 90’s.

There is clearly a lot of love between Ellen and Sean Hayes, who plays Jack on Will & Grace. And for a brief moment, America got to see two of the most famous queer people duking it out over who is the bigger gay icon.

Honorable mention: Ellen dresses up as a straight woman for Halloween

It probably wasn’t her intention to make fun of straight people, but that’s one way to read what she did.

For the first time ever, Nickelodeon’s ‘Double Dare’ features a family with two dads