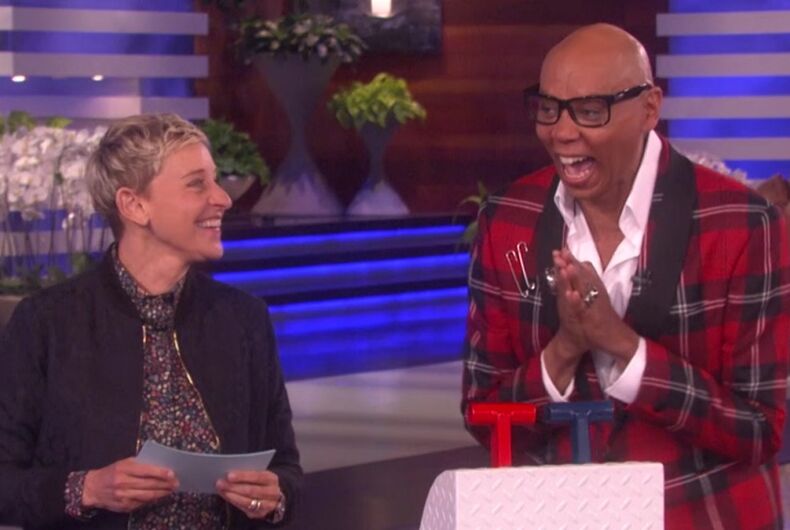 Ru appeared on Ellen's show earlier this year, and now he'll be working for the same company.Photo: Screenshot/Ellentube

Ellen’s show was really gay earlier this week when she had a “Battle of the Gays” with Will & Grace‘s Sean Hayes, and it just got even gayer.

RuPaul was Ellen’s guest yesterday, and the two combined their trademark contests and had straight guys lipsyncing to pop songs while their wives were suspended from the ceiling.

Ellen has a regular segment called “You bet your wife,” where two women are hung from the ceiling, their husbands “bet” that their wives can answer certain questions, and they drop if they can’t.

And on RuPaul’s Drag Race, each episode ends with a “Lipsync for your life,” where two queens lipsync to a song and the one with the better performance gets to stay while the other gets eliminated.

Putting them together, Ellen hosted “Lipsync for you wife,” where the husbands lipsynced and Ru judged.

After the first round and the men realized that the stakes were real, they put a lot more into their performances.

RuPaul was back later in the show and talked about the upcoming season of RuPaul’s Drag Race and his love of Judge Judy.

‘Love, Simon’ is a feel-good, gay coming-of-age movie. It matters.