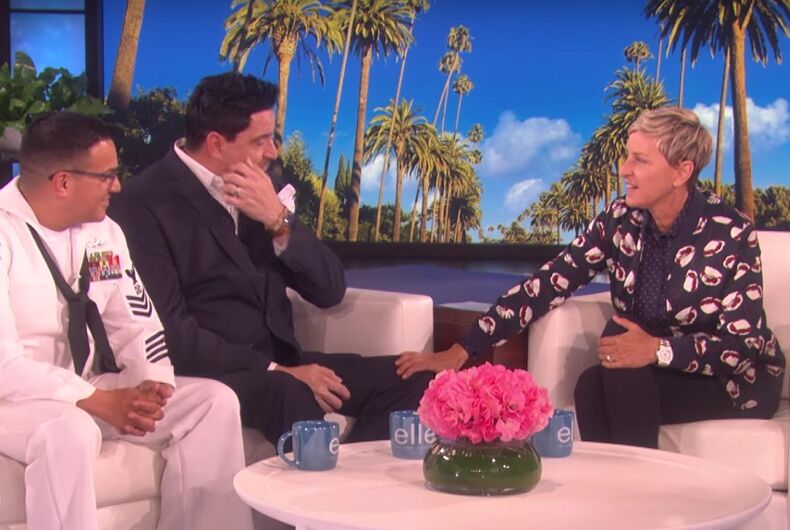 Ellen talked with Brian Alvarado, who was recently honored as the Armed Forces Insurance Navy Spouse of the Year.

Brian is married to Matthew, who has been in the U.S. Navy for 19 years. Brian is the first same-sex spouse to receive that honor.

The Spouse of the Year award is given to a military spouse who engages in community service. Brian told Ellen that he’s involved in several projects, but his favorite is his work with “Hiring our Heroes,” which helps veterans get civilian jobs.

He got teary-eyed when he told Ellen that her coming out was the same year he graduated high school. “For my entire adult life, you have been a true inspiration, for us to live our authentic selves and to not be defined by our sexuality and to go out into the world and do good,” he said.

Brian then presented Ellen with a military challenge coin to thank her for “inspiring the nation with love and hope.”

“In 19 years of being in the Navy, did you even think this kind of title would be possible?” Ellen asked Matthew.

He said that he spent most of his military career under Don’t Ask, Don’t Tell, but said that when it was repealed it wasn’t a big deal.

“The Department of Defense and the U.S. Navy have taken great strides in the last few years to, first of all, be accepting and loving, and just see us as a sailor and his spouse,” he said.

Jimmy Kimmel issues a ‘sorta’ apology for his hipster homophobia