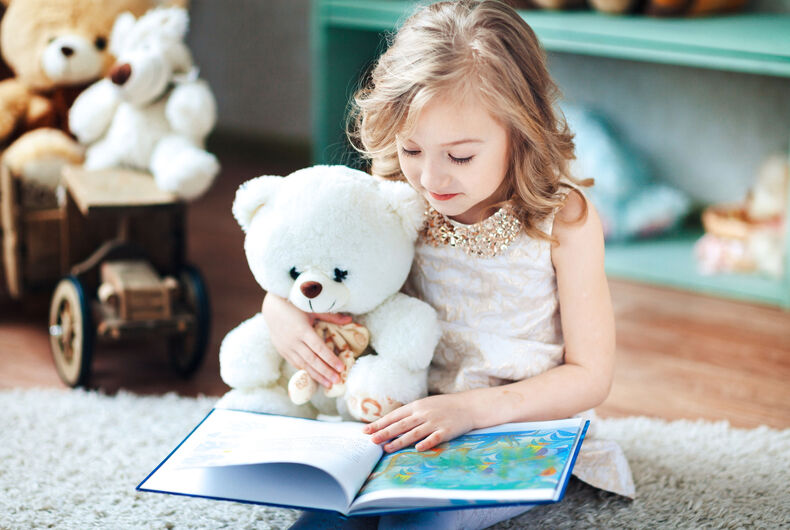 Remember One Million Moms, the right-wing nut job organization–comprised of far less than a million moms, mind you–that tried to boycott JC Penny for hiring Ellen DeGeneres as a celebrity spokesperson? Or that tried to boycott Campbell’s soup for featuring an ad with two dads? Or that argued comic books make men gay? Or that suggested GEICO promoted bestiality in its ads featuring a pig?

One Million Moms has announced a new target this week: children’s books. The group, which features only 180,000 followers on Facebook, many of them men, has declared war on kiddie book publisher Scholastic (home of Harry Potter in the US) for offering a handful of books featuring children with same-sex parents, or (of course) transgender characters.

The group argues that the books will confuse children into accepting homosexuality or transgender characters as normal and morally acceptable. To date, Scholastic has not issued a response.

“According to its website, Scholastic Inc. reaches 6 million children per week with its publications. It features morally toxic reading lists for children,” the group told its followers. “Scholastic does not have our children’s best interests at heart.”

“Picture books that deliberately target young children with the idea that a biological boy can become a girl are false, harmful, and confusing,” the group encouraged followers to send the company in a pre-written message.

“Scholastic is attempting to normalize gender dysphoria, which is a mental disorder that requires psychological help and not praise,” the message continued.

While seeing a therapist or psychologist is a normal part of the process of coming out as transgender, it is also common for people coming out as gay, people grieving after the death of a loved one, children whose parents are divorcing, and people who are attempting to leave religious cults that try to control their followers’ thinking.

Whackjob groups like One Million Moms have long targeted books featuring LGBT themes. Among the titles: Tango Makes Three, a book about real-life gay penguins, I am Jazz, a book about growing up transgender by activist Jazz Jennings, and graphic novel Fun Home.

One Million Moms also took aim at Disney recently over a storyline on Andi Mac featuring a gay child, referring to the story as “adult content.”

For the record, the organization does not have a good track record act actually succeeding in its boycotts. Ellen remained JC Penny’s spokesperson, Andi Mac continues to feature its gay character, and GEICO still has commercials featuring talking animals.

Bea Arthur will make a cameo in Deadpool sequel?

Ellen & Demi Lovato didn’t straightwash it when they played ‘Who’d You Rather?’