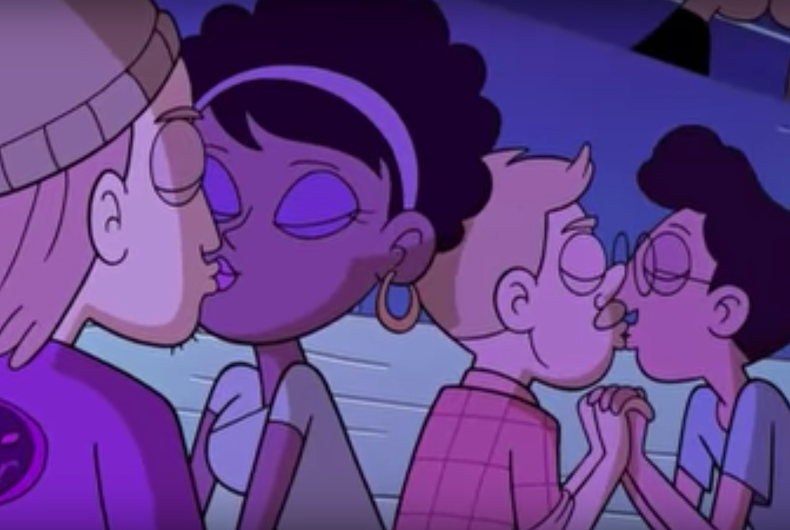 "One Million Moms" are calling for a boycott over this kiss.Photo: Screenshot via YouTube

The “One Million Moms” group is up in arms again over perceived threats to conservative families after the Disney Channel’s Star vs. the Forces of Evil showed same-sex couples kissing in a crowd.

In an email, the group admitted the displays of affection were “subtle” but painted the portrayal as the most recent in a string of gay-friendly offenses, Joe.My.God reports. The episode features a scene at a concert where people in the crowd, including some same-sex couples, kiss on cue with the song. The group also expressed concern over kisses shared between characters whose gender was not clear.

OMM claimed that the increase in LGBTQ characters and scenes was the result of pressure from gays.

“Though this is the first on-screen same sex PDA, Disney has included a homosexual relationship in its TV show Good Luck Charlie. Disney has been under pressure from the gay community to portray openly gay relationships in its TV shows and movies,” the group wrote. “And last fall, the creators of Moana mentioned in an interview with a liberal media source that they wouldn’t rule out an LGBT Disney princess. Director Ron Clements said, ‘It seems like the possibilities are pretty open at this point.'”

“This is the last place parents would expect their children to be confronted with content regarding sexual orientation. Issues of this nature are being introduced too early and too soon, and it is becoming extremely common and unnecessary,” they said. “Disney has decided to be politically correct versus providing family-friendly entertainment. Disney should stick to entertaining instead of pushing an agenda. Conservative families need to urge Disney to avoid mature and controversial topics.”

Just wait till they find out about the “exclusively gay moment” in Disney’s upcoming remake of Beauty and the Beast. The group has also objected to a Taco Bell commercial for saying “hell,” Zales for including a lesbian couple in its commercial, and Highlights magazine for featuring a same-sex couple.

OMM ends the email by asking supporters to sign a boycott pledge.

Check out the offending scene below.