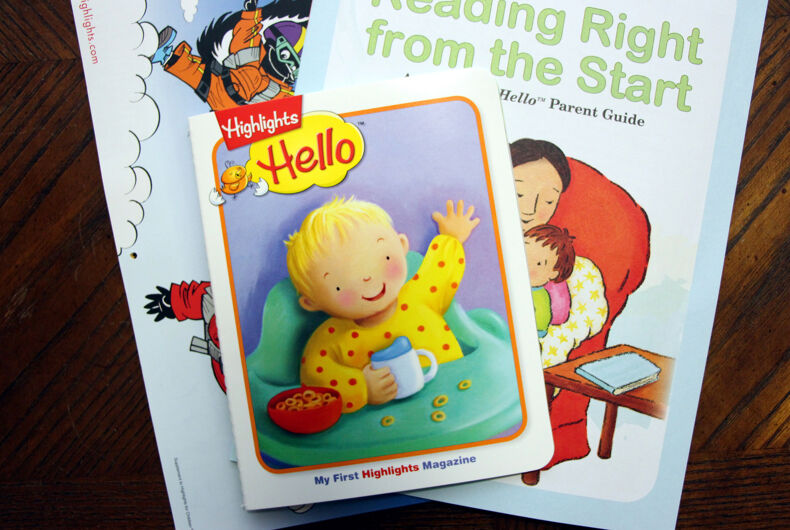 One Million Moms is at it again, fresh off its fit over a Zales commercial featuring a lesbian wedding. The group has now set its sights on pressuring Highlights children’s magazine to abandon its plans of including families with same-sex parents.

According to The American Conservative, a concerned mother was unable to get a straight answer on whether Highlights would feature same-sex couples as they suggested they might start doing, prompting her to cancel her subscription.

It was then that she says she got a response to her query.

“Where is the last place parents would suspect their kiddos to be exposed to same-sex ‘families’ portrayed as normal? In the current controversy, Highlights magazine decided to include same-sex families in their magazines. Babies and preschoolers will soon be introduced to this sensitive topic in the Highlights line of magazines,” One Million Moms writes in a panicked call to action on its website. “Parents are seeing more examples of children being indoctrinated to same-sex families as normal, especially in the media. Children’s publications are no longer off limits, even those that cater to toddlers and elementary age children.”

“Many parents and grandparents buy subscriptions to these magazines as gifts, especially at this time of year. They should be warned of the upcoming change of content in these kid’s magazines,” they add. “This would be a deal breaker for conservative families. Parents are left with no other choice than to cancel their subscription. Even if 1MM didn’t disagree morally with the decision, it is not a magazines’ job to introduce so called “social issues” to children. That is a parent’s role.”

Highlights was called out for its lack of diversity and absence of LGBTQ families earlier this year by a lesbian couple who were disappointed that they were not represented in their child’s favorite magazine.

The company’s initial response proved unsatisfactory to the couple and to the wider LGBTQ community, who soon let them hear it. Highlights changed its tune after the comments poured in.

“In our initial response, our words weren’t reflective of our values, intentions or our position, and we apologize. We want to assure you that we have read every message and are listening carefully,” a spokesperson stated.

“We want to reiterate that we believe all families matter. We know that there are many ways to build a family, and that love is the essential ‘ingredient.’ This conversation has helped us see that we can be more reflective of all kinds of families in our publications. We are committed to doing so as we plan future issues.”

We now have confirmation they were serious, provided they are willing to stand up to the boycott that is sure to follow.

One Million Moms is calling on supporters to let Highlights know how they feel by calling, emailing and “connecting” with them via social media.

In case you would like to register your support of more inclusion and more diversity by the company in its magazines, here is that information:

Did Time include a secret dig at Donald Trump in Person of the Year cover?