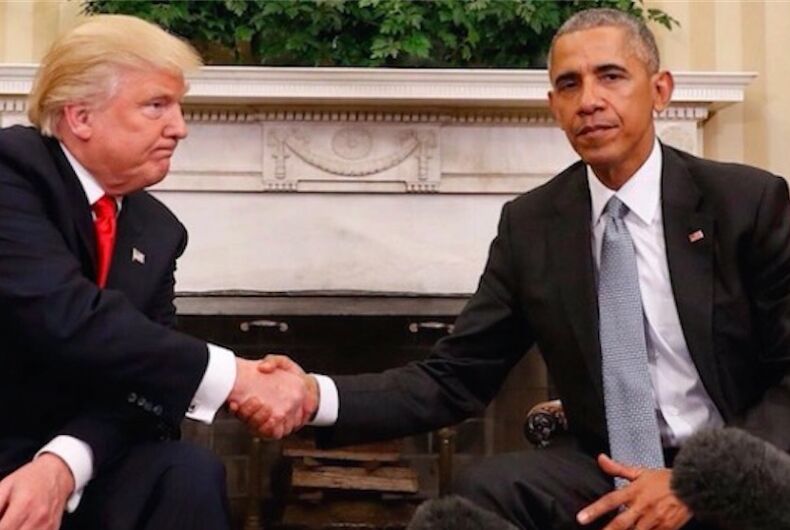 A shift has taken over President-elect Trump in the weeks since his astonishing election upset, predictable and irksome all at once. Remember that illegitimate Kenyan-born terrorist sympathizer Trump warned for years was wrecking havoc from the White House? Well these days Trump seems to be a big fan of President Obama. And that’s understandable as both sides work towards a peaceful transition of power, a cornerstone of our democracy.

But that congeniality can only go so far, and for his part, Obama has been tight-lipped, saying he’s rooting for Trump’s success because “We all want what’s best for this country.” What else can he say, really?

Trump, on the other hand, is playing up his relationship with the outgoing president to the point of insult, which if he were a character in Street Fighter, would be a signature offensive move. Most recently, Trump has spoken about consulting with the president on his impending appointments, suggesting Obama helped guide them.

Speaking to NBC’s Today, Trump said, “I have asked [President Obama] what he would think of this one and that one. I would say that, yes, I take his recommendations very seriously, and there are some people that I will be appointing, and in one case have appointed, where he thought very highly of that person, yes.”

He declined to mention which of his public appointments have come at the supposed blessing of Obama, but scanning the list of them, it’s hard to see where the President’s influence might be felt.

Obama’s administration was the most diverse in history — women and minorities held the majority of top positions for the first time ever. It fought for LGBTQ rights, for women, for minorities, for families.

Trump doubled down in an interview with Time, after being named the magazine’s “Person of the Year” (for reference, Hitler was person of the year in the same publication 78 years ago).

Speaking of the president, Trump said, “We talked about some of the potential appointments that I would make. I wanted to get his opinion. And he gave me some opinions on some people that were very interesting to me, and that meant something to me. I believe in asking people. We have different views but he loves our country. And he wants what’s good for our country. So I did talk to him about certain people that I’m thinking about. Got his ideas.”

Trump may try and take credit for Obama’s progress on healthcare, or jobs, or the economy — but if he’s hoping to pin the despicable cast of characters he’s lined up in the wings to assume the most powerful positions in the land on the outgoing president, he needs a new game plan.

Trump’s “drain the swamp” appointments have been proven time and time again to be the exact opposite, and that’s to say nothing of the fact that many of his incoming ilk have some serious antigay skeletons in their closets. Sorry Donald, this one’s on you.

After the two met in the White House for a 90-minute post-election meeting, Trump explained, “I’ve now gotten to know President Obama. I really like him. We have — I think, I can say at least for myself, I can’t speak for him, but we have a really good chemistry together.”

Obama presidential historian and journalist David Remnick put it a bit differently in The New Yorker:

The official line at the White House was that the hour-and-a-half meeting with Trump went well and that Trump was solicitous. Later, when I asked Obama how things had really gone, he smiled thinly and said, “I think I can’t characterize it without . . . ” Then he stopped himself and said that he would tell me, “at some point over a beer—off the record.”

He, like us, isn’t expecting that beer any time soon. But it doesn’t take a mind reader to detect some signature-Trump bull crap in this whole “Obama thinks I’m fantastic and helped me pick my antigay cabinet” narrative.

HIV infections in the Philippines have gone up 100%