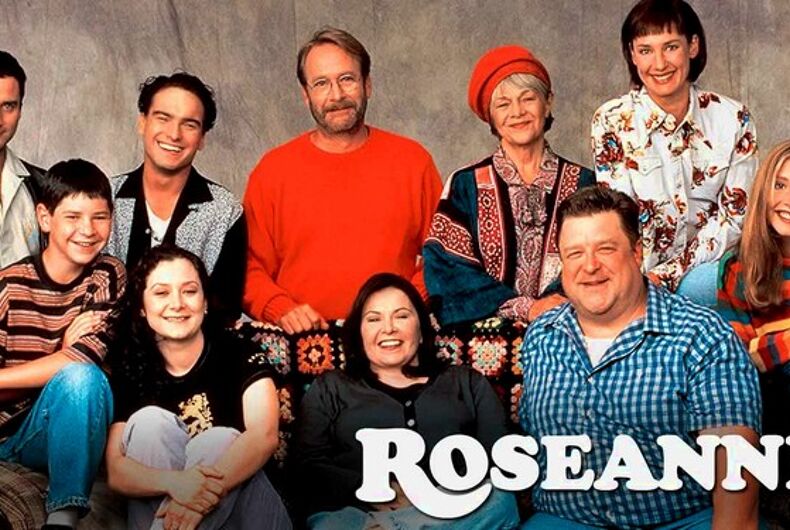 Christian group One Million Moms is up to its regular panicky ways, this time calling foul over the Roseanne reboot, reportedly set to include a gender fluid child.

The group’s director, Monica Cole, sent out an email, including a call to action to sign their boycott petition, “since the show is promoting gender dysphoria and purposefully confuses children.”

The new “Roseanne,” airing in 2018, has decided to feature the gender fluidity issue. Reports have said that of Darlene and David’s two children, one will be a 9-year-old son, Mark, who’s “gender creative.”

The casting notice obtained by Fox News describes the character as “sensitive” and “effeminate.” Mark “displays qualities of both male and female young child traits,” according to the casting call.

Unfortunately, the age of Roseanne’s grandchildren may attract young viewers, so the victims of this outrageous program are the young cast members, not to mention any child who views the show. The sexualization and moral corruption of these children is child exploitation at its worst. No child should be introduced to the experience of mental disorders.

Neither “Roseanne” nor ABC are strangers to controversial storylines. The original series aired from 1988-1997. The show first made headlines when it featured a lesbian kissing scene. This new series will inevitably be celebrated by the LGBT community, as the 9-year-old is the first “gender non-binary” character to appear on network TV.

This will only be the beginning unless we speak up. Consider that the original “Roseanne’s” most controversial move was once a kiss between two women – that’s sadly a common scene on network television today.

Placing gender fluid and non-binary characters in mainstream television shows are the next step in normalizing a culture that dissociates a person’s biological gender from their “gender identity.”

DNA proves a female is female and a male is male. There is no gray area here and no such thing as “gender fluid.” Confusing young viewers and child cast members with gender dysphoria is destructive. ABC is glorifying gender dysphoria, also known as gender identity disorder, and using a child to promote this mental disorder.

Do you plan to watch the show when it returns to the airwaves next year?

This conservative politician is so terrified of his trans opponent, he won’t debate her