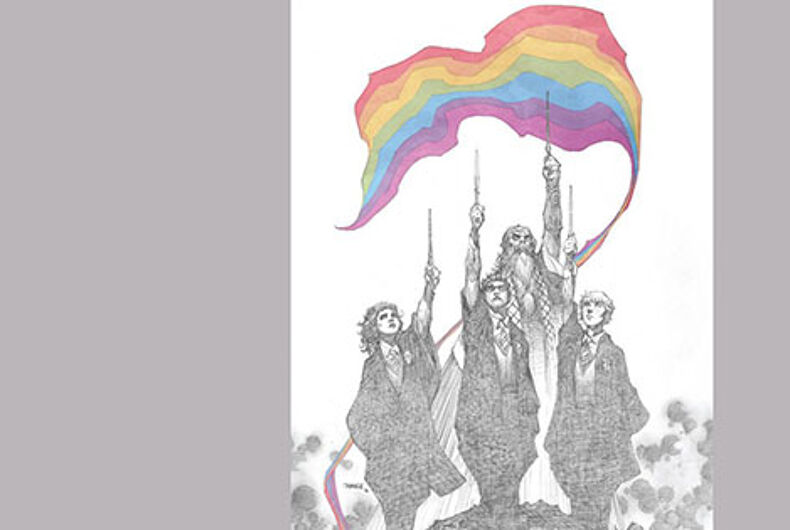 An anthology comic being produced to benefit the victims and families who lost loved ones in the shooting at Pulse in Orlando, Fla., has scored the support of a huge name in publishing: Harry Potter author J.K. Rowling, who according to Bleeding Cool, has for the first time ever permitted a drawing of her beloved Hogwarts characters in a comic book.

And not just any sketch; the approved illustration for Love Is Love, by Jim Lee, features Harry with his friends Ron Weasley and Hermione Granger, and their beloved gay former headmaster, Albus Dumbledore, as they cast a spell that appears as an unfurling banner comprised of Pride rainbow colors.

Love is Love, to be published jointly by IDW and DC Comics, consists of 144 pages and will retail for just $10, when it becomes available on December 28th. All of the material was donated by writers, artists, and editors and all proceeds will go to Pulse victims, survivors, and their families via the Equality Florida organization.

Out comic book writer Marc Andreyko has headed up the project, and as The New York Times reported, he’s recruited pages from the documentarian Morgan Spurlock, out actor Matt Bomer, comedians Patton Oswalt and Taran Killam, among other entertainers.

The drawing accompanies a Dumbledore quote from Harry Potter and the Goblet of Fire, “Differences of habit and language are nothing at all if our aims are identical and our hearts are open.”

In an Instagram post by Lee, the artist says that quote inspired him to create his contribution to what he calls:

“an amazing anthology an collaboration of comicdom’s finest talents.”

Mark Chiarello is credited as colorist.

Click here to pre-order your copy of Love is Love.

Check out @georgegustines lovely article in the @nytimes in which my "Love is love" contribution is revealed. This first of a kind illustration was done with #jkrowling's blessing, inspired by her quote: “Differences of habit and language are nothing at all if our aims are identical and our hearts are open.” –The Goblet of Fire #harrypotter #Loveislove is an amazing anthology and collaboration among so many of comicdom's finest talents with all proceeds going to the victims, survivors, and their families of the Orlando shooting tragedy via EQUALITY FLORIDA. I want to thank @idwpublishing editor #SarahGaydos and @dccomics Vertigo group editor @jamie_s_rich for their tireless work in making this book a reality. The full uncropped image available in the book in stores 12/28. Colors by the magnificent @markchidc!