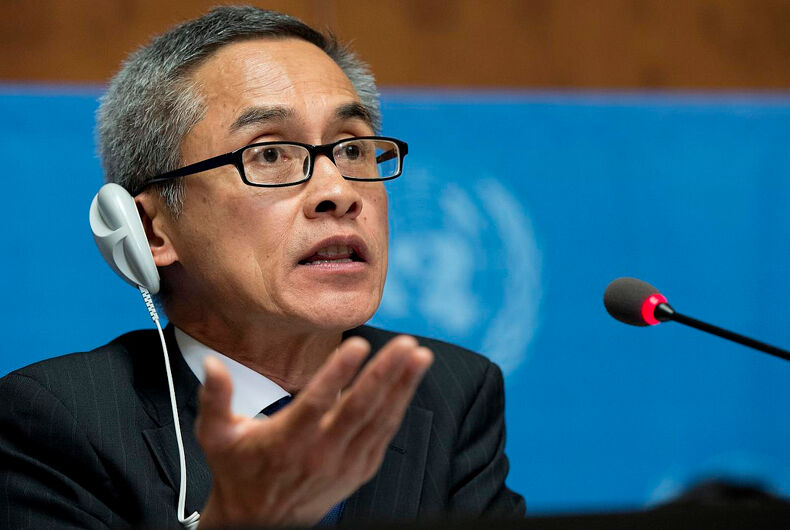 Vitit Muntarbhorn of Thailand has been appointed the first United Nations expert on anti-LGBT violence and discrimination.Photo: United Nations

UNITED NATIONS (AP) — Supporters of gay rights won a major victory at the United Nations on Monday with the failure of a second African attempt to stop the work of the first-ever U.N. independent expert investigating violence and discrimination based on sexual orientation.

After a first defeat Nov. 21 in the General Assembly’s human rights committee, African nations led by Burkina Faso attempted again to suspend the work of LGBT expert during the final General Assembly vote. But the result was almost identical.

The Africans urged the 193-member world body to delay implementation of a resolution adopted by the U.N. Human Rights Council in Geneva in order to determine “the legal basis” for the expert’s mandate. They also sought to suspend the expert, Vitit Muntarbhorn of Thailand, who was appointed on Sept. 30 and has started his work.

But their proposed amendment for a delay and suspension was defeated in the General Assembly by a vote of 77-86, with 16 abstentions. The human rights committee vote had the same number of LGBT supporters and opponents.

African nations said they wanted a delay because “there is no international agreement on the definition of the concept of ‘sexual orientation and gender identity.'”

She said violence and discrimination based on sexual orientation and gender identity are “well established” and have been referred to in U.N. statements and resolutions including in the General Assembly and Security Council.

The U.N. has worked to improve the rights of the LGBT community in recent years but has repeatedly run into opposition from some member states — especially from countries in the Middle East and Africa as well as China and Russia.

According to a U.N. human rights report last year, at least 76 countries retain laws used to criminalize and harass people on the basis of their sexual orientation and gender identity or expression, including laws criminalizing consensual same-sex relationships among adults.

The International Service for Human Rights said 870 organizations from 157 countries around the world signed an open letter urging nations in the General Assembly to continue the LGBT expert’s work.

Discrimination and violence faced by lesbian, gay, bisexual and transgender people around the world “is real and needs to be combatted,” she said, and the close vote shows how much work is needed to build bridges with many countries.

Don’t blame the Electoral College for Trump, blame yourself