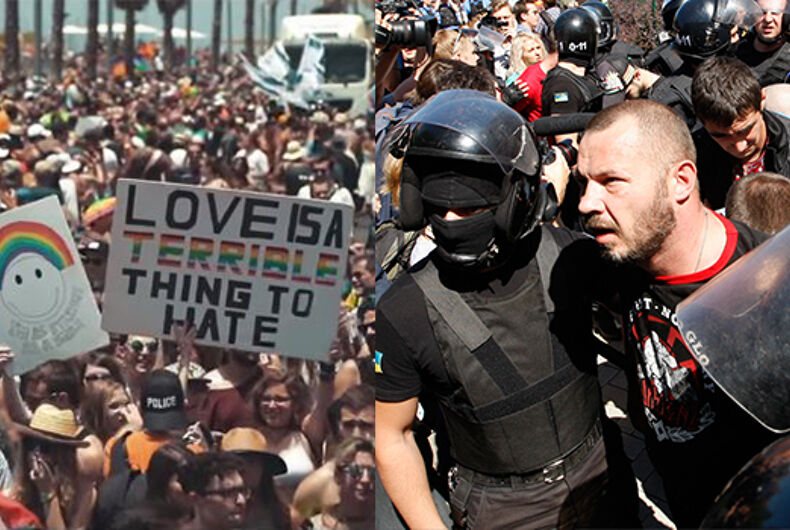 Tel Aviv Pride went on in spite of a threat (l), and threats as well as actual acts of violence have befallen Pride events in Ukraine (r). Photo: YouTube/Basti Hansen, Vladimir Donsov, AP

Pride events offer a chance to express oneself, call for LGBTQ rights, and celebrate the victories that have so far been achieved in that ongoing struggle. Yet some still take such issue with these outward signs of progress and community, including in some cases resorting to threats and violence.

In some places it has become impossible to stage such such events, either due to the threats, laws banning them from taking place, or a combination of both.

Last year’s pride event in Uganda, for instance, was cancelled after an alleged threat from a government official. An attempt to hold it at a later date was stopped by police.

In another example, the last Moscow Pride was held in 2011, as the following year the courts enacted a 100 year ban on LGBTQ pride parades.

Elsewhere, threats have been made, and at times even acted upon, but it couldn’t stop the show of pride.

Here is to love winning out over hate. Here is to continuing to fight for what’s right in the face of anger and bigotry.

The situation in the Ukraine for LGBTQ individuals has long been dicey. Each year, including this one, pride events take place under the threat of violence.

Police presence is always heavy, but in 2015 it could not prevent anti-LGBTQ thugs from attacking the marchers. Last year, the event came off more smoothly, despite neo-Nazis threatening a “bloodbath,” with thousands of police officers there to keep the peace.

This year, as Reuters reports, the anti-LGBTQ faction was again well represented. Some burned the rainbow flag, mirroring an action that recently occurred in the Ukrainian city of Kharkiv, and police had to hold them back to keep a violent confrontation from breaking out.

Hundreds of police were on hand for Tel Aviv Pride 2017, amid heightened tensions, as on the Sunday before the event they arrested a man for making an online terrorist threat.

“Who’s coming with me to carry out a terror attack at the pride march?” the 20-year-old suspect wrote in Hebrew on Facebook.

The threat was particularly unnerving in light of the attack at a pride parade in Jerusalem in 2015, where a man stabbed a teenage girl to death, and injured several others.

Thankfully, Tel Aviv Pride 2017 went off without a hitch, with tens of thousands of revelers flocking to Israel’s beautiful coastal city.

Honestly, if the video below doesn’t make you want to get to the next Tel Aviv Pride you may want to check to see that your heart is still beating.

This year marked Beirut’s first ever pride, and sadly it was threatened by an Islamist group, forcing the cancellation of an event organized for International Day Against Homophobia, Transphobia and Biphobia.

But the threats weren’t enough to put a stop to Beirut Pride, and happily it went ahead as planned, making history.

“It’s about having the guts to confront,” activist Joseph Aoun told NPR on fighting back against those who wish to silence the LGBTQ community.

The LA Pride Parade last year took place on the same day as Pulse shooting in Orlando, bringing a somber yet resilient tone to the proceedings. Community members decided to not let hatred and fear win the day, and made themselves visible in the fight for love and equality.

Shockingly, what was unknown to most on that day until well after the last float rolled past the crowd was that police had arrested a man, one James Wesley Howell, earlier that morning. He was on his way to the parade, along with a loaded assault rifle and chemical explosives in his car, mixed and ready for detonation.

He has pleaded not guilty.

Authorities decided to carry on with the parade after some deliberation, and there were no incidents of violence.

The FBI investigated a threat made on Twitter ahead of last year’s Houston Pride that promised a “massive shooting at the pride parade.” The tweet was posted on June 13, the day after the Pulse shooting, and less than two weeks before the parade.

Police increased security at the event, and the parade carried on as usual.

Police and parade organizers became aware of a terrorist threat made online last year ahead of Toronto Pride, but there was never any question that the show would go on as planned.

The post included a picture of a gun, information about the parade’s time and location, and a call to action.

“The Toronto Gay Pride Parade is an excellent target,” it said. “Plenty of kafir sodomites to kill.”

“Pride Toronto will not contribute to a culture of fear by responding to threats,” organizers said in a statement. “Instead, we will continue to focus on creating a safe space for our community and city to enjoy the remainder of Pride Month.”

And so they did, and as you can see below, it was fabulous.