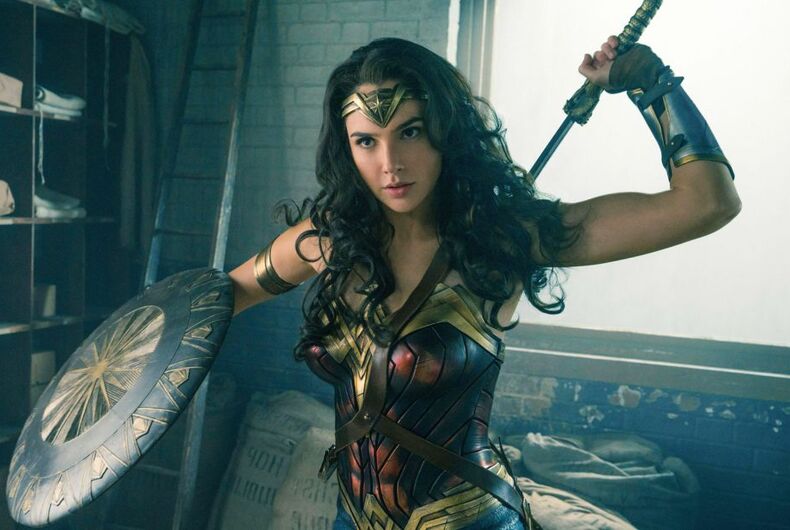 I just saw Wonder Woman last night, and I have not reacted this emotionally to a movie since Brokeback Mountain.

I get why women are reacting so positively to the movie; as a gay man, I know that my well-being in society is inextricably tied up in women’s empowerment and there was something about this movie that went beyond seeing a woman as a superhero.

Last year, America saw a qualified woman run for president and lose to a completely unqualified man who didn’t even get more votes than her. It was a scary glimpse of just how broken the political system is.

Even though production began well before the election last November, Wonder Woman feels like a direct response to that feeling of injustice.

1. Wonder Woman is a leader who men want to follow, and they just do.

Wonder Woman, aka Diana Prince, is a warrior-princess who leaves the secluded island of the Amazons during World War I on a mission to kill Ares, the Greek god of war, and save humanity.

With such an ambitious project, she’s going to need allies. I was expecting a lot of Mad Men-esque “Look at how un-sexist we are in 2017!” nonsense. I was expecting half the movie to be about men telling her she can’t fight because she’s a lady, about men who feel useless next to a powerful woman, about men saying that they can’t follow a woman into battle.

Even if the men come around by the end of the movie, it still would have been a movie about men and sexism. That’s a topic that needs to be discussed, but what about just putting that aside for two hours? Envisioning a world without a certain problem is necessary to fighting that problem.

In Wonder Woman, Diana just rocks, the men recognize that, and they help her and follow her into battle. It’s as simple as that.

No lies, no looking into every moment of her past for a flaw, no double standards. She’s obviously awesome, and people want her on their side.

2. Wonder Woman is not nihilistic. She’s all heart.

Diana has a way of floating above the other characters. She’s not really a part of their world, and she’s not just a fish out of water. She’s has high ideals and she makes no apologies for them.

Moral complexity in fiction is great, but there’s a difference between moral complexity and nihilism. Seeing the flaws in all sides of a conflict is important, but it’s frustrating for that to be an excuse for inaction.

Wonder Woman herself knows that humans are more complicated than “good versus evil,” but she doesn’t take that to the place where there’s nothing worth valuing in this world.

Trump’s campaign was all about nihilism: what have you got to lose? Everything is awful, so I can’t make it worse. The media blew Clinton’s flaws out of proportion to make it seem like Both Sides Do It, and I had supposedly progressive friends tell me they just wanted to see him burn everything down because everything is so terrible.

Diana fights for love, honor, and justice in an age when nihilism is chic. And it’s just so refreshing.

Why does Diana Prince want to save the world?

Well, if the world needs to be saved, then someone’s got to do it!

There’s nothing wrong with her that makes her fight. There’s no troubled past, no one she wants to avenge. Yes, troubled heroes can be great to watch, but why does every female superhero have to have a dark past that makes her want to help others?

It reminds me of another famous woman who devoted most of her life to helping others out and faced decades of scrutiny because some people just couldn’t believe that a woman would want the most powerful job in the world for any reason besides personal gain….

4. Wonder Woman doesn’t base her sense of duty on how much people deserve to be helped.

One of Wonder Woman‘s main themes is whether humanity “deserves” to be saved. We can be pretty terrible, so why should someone so good trouble herself with helping us?

Especially since she trained hard since she was a child to be the person that she is today. Couldn’t everyone else just try harder instead of depending on her?

Superhero stories don’t usually raise these questions, but Wonder Woman went there and made it central to the story.

Diana’s answer to that big question is just so right-on: who cares about merit when there’s so much need?

So many times have I heard some permutation of “Why should we have to help someone who could have done X or Y?” in political arguments, which then gets the conversation bogged down in whether it’s reasonable to expect people to do X or Y.

Diana gets that question thrown at her time and again, but she’s not deterred. Ultimately there’s no way to prove or disprove that people deserve because there is no objective standard to determine merit. Instead, what’s important are our beliefs.

5. Wonder Woman gets to be right.

Diana is an Amazon princess who is trying to find Ares and kill him. In the 20th century.

So some people think she’s crazy.

In the end, the problems are more complex than she thought they would be, but fundamentally she’s right.

Diana is more idealistic than everyone around her, has a vastly different belief system, is a strong woman in a world run by men, and holds fast to her sense of duty and justice.

And she gets to be right, dammit.

Trans worker forced to use the broom closet as a bathroom