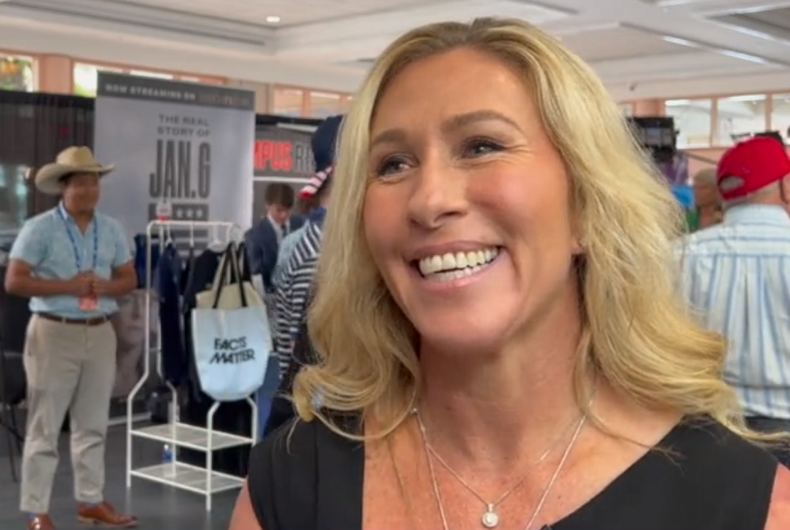 White supremacist Nick Fuentes called out Rep. Marjorie Taylor Greene (R-GA) over the weekend, calling her “a divorced woman girlboss” in a streamed show. This comes months after Greene was one of the few prominent Republican elected officials willing to be seen in public with Fuentes when she appeared at his America First Political Action Conference (AFPAC) in February.

“Has she ever done anything that shows good character in her entire life?” Fuentes asked on the online show Politically Provoked. “She’s just weak. She’ll go and say something edgy to get attention, and when the pressure comes, she buckles.”

Fuentes is one of the most prominent white supremacist leaders in the country and he has gotten some attention over the last few weeks after he had dinner with Donald Trump at Mar-a-Lago, leading major Republican leaders like Mike Pence to call for Trump to apologize. He has been closely associated with Kanye West’s informal 2024 presidential campaign, appearing with West on Alex Jones’s Infowars last week when West said that he “loves Nazis.”

Among his many extreme statements, Fuentes has compared Jews being burnt in concentration camps during the Holocaust to cookies baking in an oven. Fuentes is also the leader of the “Groyper Army,” a group of far-right and racist internet trolls.

Fuentes allegedly caused a fight between Rep. Greene and Rep. Lauren Boebert (R-CO) after Greene spoke at Fuentes’ AFPAC. Boebert was said to be so upset by Greene’s lack of political savvy in being seen with Fuentes in public that she confronted Greene at a meeting of the Freedom Caucus. Witnesses thought the two were going to get physically violent until another member of Congress “stepped in to de-escalate.”

When Fuentes got attention again in late November when he dined with Trump, Greene denounced him. Some people on Twitter reminded her that it wasn’t that long since she was one of his few associates in Congress.

Fuentes apparently didn’t take kindly to being denounced by a woman like Greene and railed against her on the webcast.

“She’s gonna say, ‘Uh oh, COVID is like the Holocaust,” Fuentes said. “Oh so edgy, wow, drink up all that attention, here’s the attention you ordered. And then the second it gets too hot, she’s ‘Oh I’m sorry. I went to a Holocaust museum.”

He was referring to when Greene said that Congress’s mask mandate was like when people “were put in trains and taken to gas chambers in Nazi Germany.” She later apologized and visited the Holocaust Museum in D.C. after several other House members called for a resolution of censure against her.

Elsewhere on the far-right is more strife as ex-gay troll Milo Yiannopoulos is reportedly out of West’s informal 2024 presidential campaign.

“Ye [West] and I have come to the mutual conclusion that I should step away from his political team,” he told The Daily Beast. “I will continue to pray for Ye and all his endeavors.”

Yiannopoulos claimed to be behind Trump’s dinner with Fuentes in an attempt to get revenge on Trump, which may be related to his statement last month that Trump is “continuing to suck the boots of the Jewish powers that be who hate Jesus Christ.”

Yiannopoulos claimed that he wasn’t involved with West just to get access to his extremely wealthy lifestyle and that he “will continue to pray for Ye and all his endeavors.”

On social media, Yiannopoulos appears to still be close with Greene after he interned for her earlier this year. He said, “I love this woman,” on the social media platform Telegram as recently as October as he shared clips of her media appearances.

Greene’s husband filed for divorce this past September. The U.K. tabloid The Daily Mail reported last year that Greene was having an affair with gym manager Justin Tway and “polyamorous tantric-sex guru” Craig Ivey. Greene denied the allegations, calling the rumors “ridiculous tabloid garbage spread by an avowed Communist… because I’m the biggest threat to the Democrats’ Socialist agenda.”

Jim Kolbe, the last out gay Republican in Congress, has died