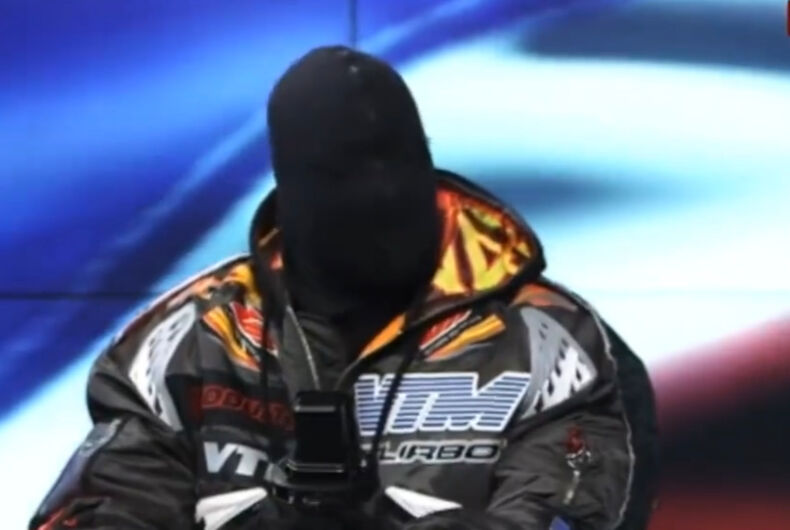 Kanye West has been suspended from Twitter again after another hateful antisemitic rant.

The rapper, who goes by Ye now, appeared on Alex Jones’s Infowars on Thursday alongside white supremacist Nick Fuentes. Following weeks of widespread criticism for his increasingly frequent antisemitic comments, Jones started the interview by trying to give West an out.

“You’re not Hitler, you’re not a Nazi, you don’t deserve to be called that and demonized,” the host said.

West, wearing a mask over his entire head, immediately responded by saying that he sees “good things about Hitler.”

Kanye West on Alex Jones: "I see good things about Hitler …. Every human being has something of value that they brought to the table, especially Hitler." pic.twitter.com/vegESNsrT4

During the hours-long, unhinged conversation, West repeated antisemitic conspiracy theories and repeatedly declared his “love” for Hitler and Nazis. He mocked Benjamin Netanyahu for criticizing former President Donald Trump, using a small net and a bottle of Yoohoo to represent the Israeli Prime Minister.

America First: Ye is a singular genius who is going to save this nation.

Ye, on Alex Jones, speaking in a baby voice and playing with a net and a bottle of Yahoo (get it?) to mock Benjamin Netanyahu for criticizing Trump for dining with him. pic.twitter.com/foeOaxtYUi

He said, “I love Jewish people, but I also love Nazis.” Jones thought that was hilarious.

“But they did good things too. We gotta stop dissing the Nazis all the time,” West said.

Alex Jones: The Nazis were thugs.
Kanye West: "But they did good things too. We gotta stop dissing the Nazis all the time." pic.twitter.com/hCdZIYoGqr

He also reportedly led Jones and Fuentes in prayer, claimed to take a call from far-right troll Laura Loomer, read antisemitic jokes about conservative commentator Ben Shapiro, and claimed to have made antisemitism “popular.”

Even Jones made weak attempts to push back on West’s pro-Nazi comments, but the rapper would not back down.

Following the Infowars appearance, West posted an image of a swastika edited into a Star of David on Twitter, leading the platform’s new owner Elon Musk to suspend his account. Before West’s account was suspended, he posted an image of a text allegedly from Musk himself saying, “Sorry, but you have gone too far. This is not love.”

Musk confirmed that West’s account had been suspended for violating Twitter’s rules against incitement to violence in responses to other tweets.

I tried my best. Despite that, he again violated our rule against incitement to violence. Account will be suspended.

Just clarifying that his account is being suspended for incitement to violence, not an unflattering pic of me being hosed by Ari.

Frankly, I found those pics to be helpful motivation to lose weight!

This is just the latest chapter in West’s very public downward spiral. In October, he appeared at Paris Fashion Week alongside right-wing commentator Candace Owens wearing a “White Lives Matter” t-shirt. Shortly after, he was suspended from Twitter for posting that he would go “death con 3 on Jewish people.” More recently, West announced his supposed intention to run for president in 2024, tapping far-right troll Milo Yiannopoulos and Fuentes to work on his campaign. In late November, West reportedly brought Fuentes to dine with Donald Trump at Mar-a-Lago, sparking widespread condemnation of the former president.

Jared Holt, senior research manager at the Institute for Strategic Dialogue, told Vice News that he is concerned that West has been elevating fringe figures like Fuentes by virtue of his own massive audience and media attention.

“Kanye’s antisemitism is not a new development, but he appears to be speed-running his trajectory down a ‘red pill’ rabbit hole as of late,” Holt said. “As such, he has welcomed despicable hatemongers into his doomed presidential campaign, who are leveraging his star power to put antisemitism in front of audiences much larger than any of them could reach on their own.”

“At some point, this becomes a numbers game where there is a risk that some of his loyal fans will agree with some of his hate against Jews. I worry about the ramifications of that in the future.”