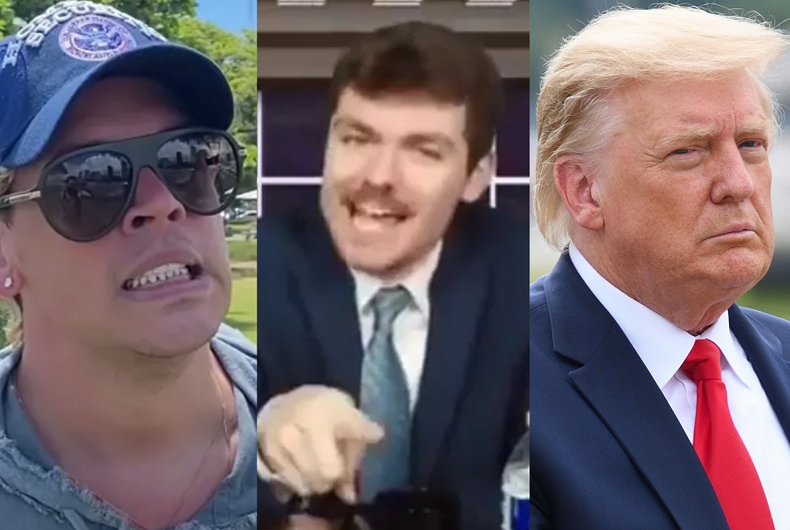 “Ex-gay” troll Milo Yiannopoulos is claiming responsibility for the dinner that may have ruined Donald Trump’s chances at winning the 2024 Republican nomination for president.

On November 22, Trump hosted a dinner with antisemitic rapper Kanye West (who is going by “Ye”) and white supremacist leader Nick Fuentes at his Mar-a-Lago resort in Florida. Trump got criticized even by many Republicans for dining with Fuentes, who is an open supporter of the Taliban because it’s a “conservative, religious force.”

Fuentes has compared Jews being burnt in concentration camps during the Holocaust to cookies baking in an oven. Fuentes is also the leader of the “Groyper Army,” a group of far-right and racist internet trolls.

Since the dinner, Trump has released several statements insisting that Fuentes was West’s guest and that he didn’t know who Fuentes was.

Yiannopoulos – who was interning earlier this year for Rep. Marjorie Taylor Greene (R-GA) and has been described as the campaign manager for West’s own presidential run – is now saying he was the “architect” behind the dinner.

“I wanted to show Trump the kind of talent that he’s missing out on by allowing his terrible handlers to dictate who he can and can’t hang out with,” he told NBC News.

“I also wanted to send a message to Trump that he has systematically repeatedly neglected, ignored, abused the people who love him the most, the people who put him in office, and that kind of behavior comes back to bite you in the end.”

Yiannopoulos claimed that he arranged the dinner “just to make Trump’s life miserable.”

Trump appeared to echo Yiannopoulos’s sentiment that he was on the receiving end of a trick.

“Trump was totally blindsided,” the source claimed. “It was a setup.”

West, though, isn’t exactly distancing himself from Fuentes. Yiannopoulos said that Fuentes is serving in an “advisory capacity” for West’s campaign.

Yiannopoulos used to be one of Trump’s biggest supporters, back when he was an openly gay far-right troll, referring to the former reality TV host as “daddy” and using his platform to support Trump’s 2016 campaign.

When Trump lost the 2020 election, Yiannopoulos swore “vengeance,” declared that he would “BURN THE REPUBLICAN PARTY TO THE F**KING GROUND,” and called Trump a “selfish clown.”

The next year, Yiannopoulos claimed that he was no longer gay. He even made a video where he allegedly threw his engagement ring – which he called “the Sodomy Stone” – into the ocean to prove just how not-gay he is now. Earlier this year, he was spotted with Rep. Greene and she said that he is now her intern. He still was making racist content for the internet.

Fuentes – who says that having sex with women is gay so he refrains from any sexual activity at all – is a controversial figure on the right. The normally accommodating Mike Pence has called on Trump to apologize for giving “a white nationalist, an antisemite and Holocaust denier a seat at the table.”

Fuentes even allegedly caused a fight between Rep. Greene and Rep. Lauren Boebert (R-CO), after Greene spoke at Fuentes’ America First Political Action Conference (AFPAC). Boebert was said to be so upset by Greene’s lack of political savvy in being seen with Fuentes in public that she confronted Greene at a meeting of the Freedom Caucus. Witnesses thought they were going to get physically violent until another member of Congress “stepped in to de-escalate.”

Earlier this week, West was spotted at a restaurant with Fuentes.

Kanye really went from clubbing with Jay-Z and Pharrell to getting hibachi at a suburban strip mall with Nick Fuentes https://t.co/l3itqFH8nl

Greene said this week that she denounces Fuentes.

“Of course I denounce Nick Fuentes and his racists anti-semitic ideology,” she tweeted. “I can’t comprehend why the media is obsessed with him.”

People on Twitter reminded her of her appearance at Fuentes’ AFPAC.

#FreeKesha trends on Twitter as Kim Petras defended her collaborations with Dr. Luke