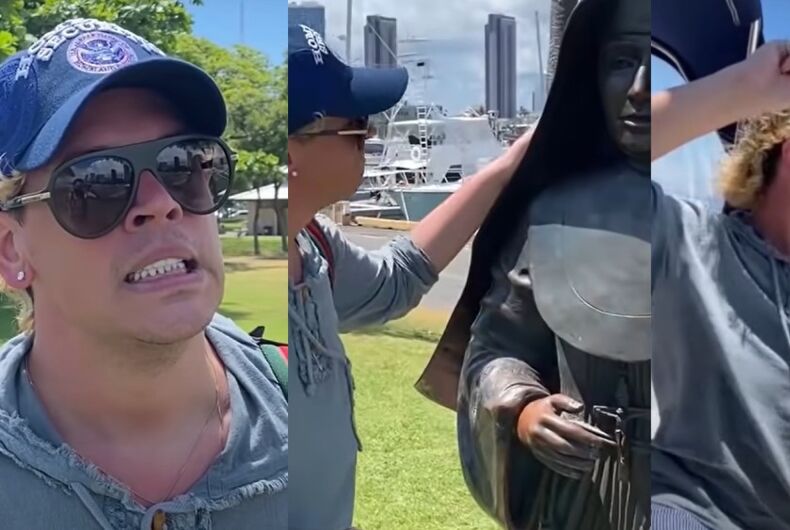 Milo got drunk and threw his $150,000 engagement ring in the ocean to show how ex-gay he is now.Photo: Screenshot/YouTube

Alt-right grifter Milo Yiannopoulos made a wild video where he claims he threw his almost $150,000 engagement ring – which he calls a “Sodomy Stone” – into the ocean near Hawaii in order to seal his new identity as ex-gay.

“It’s called ‘the Sodomy Stone,'” Yiannopoulos says at the start of the video, describing a ring he said he bought himself as a part of his former, “infernal” relationship with another man.

Related: Milo Yiannopoulos dropped a gospel single & it is as awful as you’d imagine

Several months later, he announced that he’s ex-gay – which is not a real thing – and has ended his life of “degeneracy.” He even went so far as to say that he was only gay “because it drove liberals crazy to see a handsome, charismatic, intelligent gay man riotously celebrating conservative principles.”

To show just how not-gay he is now, he decided to get drunk on a boat and throw a ring into the ocean while Celine Dion’s “My Heart Will Go On” played.

Wearing a Department of Homeland Security cap, Yiannopolous decried both the high price of diamonds as well as how it costs “thousands of dollars” to fly over a volcano to throw his ring in. Apparently he travelled all the way to Hawaii for this dramatic moment but didn’t take necessary 20 seconds to google how much hiring a helicopter costs.

“Every once in a while, the Lord sends you a sign. And He did,” he said, turning to a statue of a nun. This is how he decided to throw the ring into the ocean instead.

Now in a boat, Yiannopolous said he got drunk and prayed and realized he had to throw the ring – a symbol of gay love – into the ocean. He appeared to throw it in (it’s impossible to be certain that it’s really the diamond ring in question) and appeared to show some regret at throwing it away instead of just selling it quietly like a non-grifter would.

While expensive, the ring’s alleged value is a fraction of the crushing debt he was complaining about years ago.

The video ends with a shot of a Bible in a box with his merchandise and… fin.

Ghosting: Why LGBTQ people do it & how to deal with it