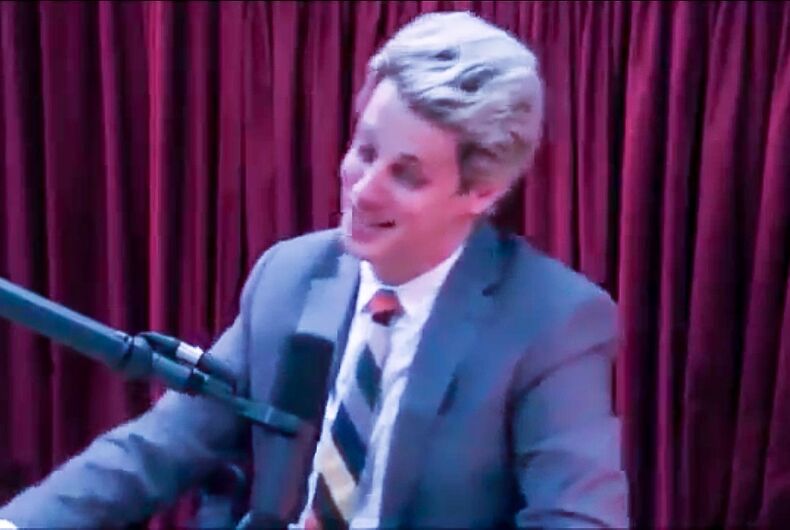 UPDATE ONE: This post has been updated to include Milo’s latest post on Facebook in which he elaborates on his denial of accusations he defended pedophilia.

UPDATE TWO: Yiannopoulos has been disinvited from speaking at CPAC after the controversy.

More controversy for Milo Yiannopoulos in the wake of Friday’s appearance on Bill Maher’s HBO show, in which he spread lies about transgender Americans and maligned both gays and women. On Saturday, the out senior editor at Breitbart was announced as the keynote speaker at the annual conference held by the American Conservative Union — a decision roundly criticized by hardline conservatives and apparently made without the approval of the ACU board.

But the bigger bombshell dropped on Sunday, when videos emerged in which Yiannopoulos can be seen and heard defending and attempting to normalize pedophilia. The so-called provocateur expressed outrage on Facebook, calling the videos “deceptively edited.” But as The Blaze reported, what seemed to bother him more is that they were unleashed by Republicans.

This is a must watch!

Here is a longer cut where Milo Yiannopoulos says that he "is advocating" for legal sex between 13 year olds! & older men. #CPAC2017 pic.twitter.com/1fiuv7TSKs

Another newly unearthed video appears to be a raw, unedited recording of a radio interview with comedian Joe Rogan, Yiannopoulos was adamant that there was nothing wrong with finding minors sexually attractive.

“So you’re saying you’ve never seen a 15-year-old girl, at any point in your life, that you thought was hot?” Yiannopoulos asked Rogan.

“No, when you were 25 or 30, you’ve never seen girls you thought were hot?” Yiannopoulos asked his host.

“No, I thought they were little kids!” Rogan said.

Yiannopoulos then discussed his sexual relationship with a Catholic priest, which he had when he was 14. Rogan called the priest, who Yiannopoulos called “Father Michael,” a “terrible person,” but Yiannopoulos denied this, saying “It wasn’t molestation.”

Yiannopoulos also boasted about a Hollywood party he attended that he said featured “very young boys” available for sex.

“A note for idiots (UPDATED):
I do not support pedophilia. Period. It is a vile and disgusting crime, perhaps the very worst. There are selectively edited videos doing the rounds, as part of a co-ordinated effort to discredit me from establishment Republicans, that suggest I am soft on the subject.
If it somehow comes across (through my own sloppy phrasing or through deceptive editing) that I meant any of the ugly things alleged, let me set the record straight: I am completely disgusted by the abuse of children.
Some facts to consider:
1. I have outed THREE pedophiles in my career as a journalist. That’s three more than any of my critics and a peculiar strategy for a supposed pedophile apologist.
(a) Luke Bozier, former business partner of Louise Mensch
https://kernelmag.dailydot.com/…/menshn-co-founder-embroile…/

(b) Nicholas Nyberg, anti-GamerGate activist who self-described as a pedophile and white nationalist
https://www.breitbart.com/…/leading-gamergate-critic-sarah-…/
(c) Chris Leydon, a London photographer who has a rape trial starting March 13 thanks to my reporting.
https://www.breitbart.com/…/tech-city-darling-chris-leydon-…/
2. I have repeatedly expressed disgust at pedophiles in my journalism.
https://www.breitbart.com/…/heres-why-the-progressive-left-…/
3. I have never defended and would never defend child abusers, as my reporting history shows. The world is messy and complicated, and I recognize it as such, as this furore demonstrates. But that is a red line for any decent person.
4. The videos do not show what people say they show. I *did* joke about giving better head as a result of clerical sexual abuse committed against me when I was a teen. If I choose to deal in an edgy way on an internet livestream with a crime I was the victim of that’s my prerogative. It’s no different to gallows humor from AIDS sufferers.
5. National Review, whose journalists are tweeting about this, published an article defending Salon for giving a pedophile a platform.
6. I did say that there are relationships between younger men and older men that can help a young gay man escape from a lack of support or understanding at home. That’s perfectly true and every gay man knows it. But I was not talking about anything illegal and I was not referring to pre-pubescent boys.
7. I said in the same “Drunken Peasants” podcast from which the footage is taken that I agree with the current age of consent.
8. I shouldn’t have used the word “boy” when I talked about those relationships between older men and younger gay men. (I was talking about my own relationship when I was 17 with a man who was 29. The age of consent in the UK is 16.) That was a mistake. Gay men often use the word “boy” when they refer to consenting adults. I understand that heterosexual people might not know that, so it was a sloppy choice of words that I regret.
9. This rush to judgment from establishment conservatives who hate Trump as much as they hate me, before I have had any chance to provide context or a response, is one of the big reasons gays vote Democrat.
10. In case there is any lingering doubt, here’s me, in the same interview the other footage is taken from, affirming that the current legal age of consent is about right: “And I think the law is probably about right. It’s probably roughly the right age. I think it’s probably about ok. But there are certainly people who are capable of giving consent at a younger age. I certainly consider myself to be one of them, people who were sexually active younger. I think it particularly happens in the gay world, by the way.””

Watch the video of Joe Rogan’s interview with Milo Yiannopoulos below: