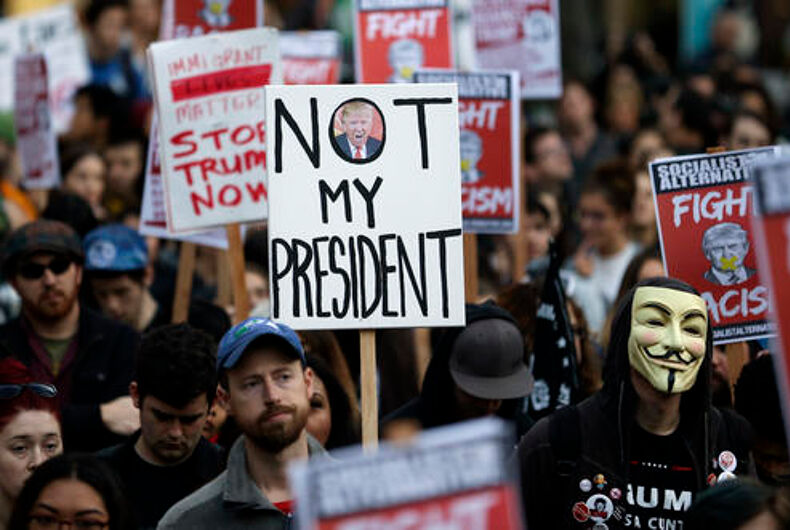 The anti-Trump demonstrations have been fast and furious ever since he entered into office, and have continued throughout this President’s Day Weekend.

Today thousands will again take to the streets in cities across the country for Not My President’s Day protests.

Demonstrators are calling on the Trump administration to stop threatening the immigrant and refugee community, and to not come after women, the LGBTQ community, or the scientific community, among others. Some are expressly calling for Trump’s impeachment, such as Atlanta’s ImPEACH NOW! march.

Meanwhile, Trump has wished everyone a happy President’s Day on Twitter, in all caps, along with his campaign slogan.

"This Land is Your Land, this land is my land", special #notmypresidentsday rendition in #DC at DuPont Circle. #resist @Rewire_News pic.twitter.com/4yWwGSgWUQ

The #NOTMYPRESIDENTSDAY march in #atlanta has started. Marchers walking down peachtree to Lenox pic.twitter.com/AjRF2Hlbml

A bit of music at #NOTMYPRESIDENTSDAY rally in NYC pic.twitter.com/2eBckLjC2H

The MAGA counter-demonstrators are here arguing for Fox and Brietbart #NOTMYPRESIDENTSDAY pic.twitter.com/w6NnLxoL0M

Blocks of protesters on what’s billed as #NOTMYPRESIDENTSDAY in NYC pic.twitter.com/WOIrHxyfZB

Anti-Trump activists prepare for Phila rally on "Not my president's day" pic.twitter.com/x3XRZMdOyo

Crowd continues to grow at the LA #NotMyPresidentsDay Rally. https://t.co/GaByrIcQ1C

A drum beat gets hundreds of LA protestors to chant in unison Monday as part of #NotMyPresidentsDay rally. pic.twitter.com/CrIaKZRONW

Our wonderful volunteers at the @UtahnsSpeakOut table for the Not My President's Day Rally! pic.twitter.com/WwXOZ0TGBM