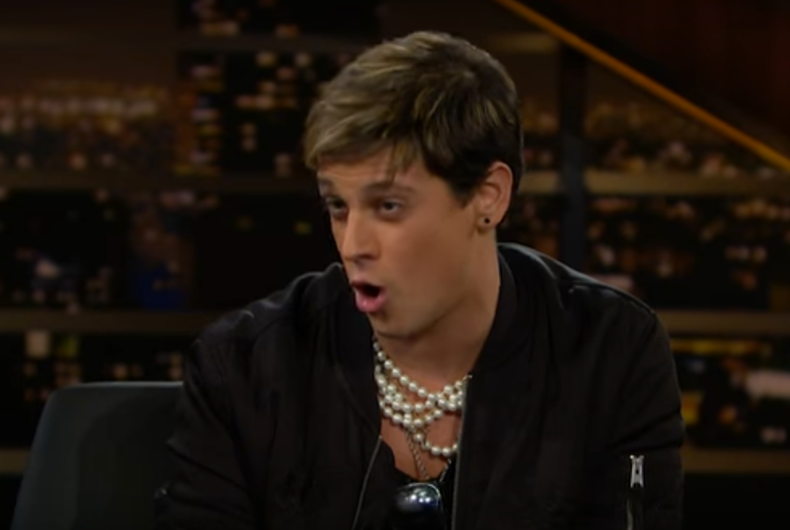 Gay provocateur and Breitbart senior editor Milo Yianoppoulos is having a mainstream moment. But not everyone is going with the flow. As the British self-professed “troll” continues to creep into the daily U.S. news cycle, voices on both ends of the political spectrum are speaking out against him.

Following Yianoppoulos’ controversial appearance on “Real Time with Bill Maher” and its online follow-up “Overtime,” guests and viewers alike are criticizing his false and inflammatory statements about transgender people.

In the “Overtime” segment, Maher asked Yianoppoulos about the transgender woman he mocked — by name and on screen — at the University of Michigan stop on his “Dangerous Faggot” campus speaking tour.

“I make no apologies for protecting women and children from men who are confused about their sexual identity,” Yianoppoulos said.

“I’m confused about who this is, because pronouns are so important,” Maher interjected. “If you call Caitlyn Jenner ‘he,’ you’re a bad person.”

“Yeah, I did it on purpose. I misgendered this person,” Yianoppoulos replied.

Maher, taking his lead, continued, “So this is a man, a born man—”

“—who thinks that he might be a girl,” Yianoppoulos finished. “I don’t have a problem with that, but I think women and girls should be protected from having men who are confused about their sexual identities in their bathrooms.”

Shockingly, Maher seemed to agree, saying, “That’s not unreasonable.” He followed up by lobbing a transphobic question to panelist former Republican congressman from Georgia Jack Kingston: “Jack, where do you stand on weirdos peeing?”

After much chuckling among the three men, comedian Larry Wilmore chimed in as the voice of reason.

“I just think it’s sad because the same arguments we used against gay people, treating them like aliens who just wanted to fuck anything that moved, and that’s why we should avoid them at all costs—” Wilmore said before getting cut of by Yianoppoulos. “There’s a difference without a distinction because it’s using the same type of arguments. It’s like when people try to compare gay and black, yeah, they’re not the same thing, we share an invisibility, you know people didn’t see us in society, people hid out from society, but there are a lot of the same issues you have to deal with when you’re marginalized.”

“But obviously people can be discriminated against for good reason, right?” Yianoppoulos interjected.

“Well they are disproportionately involved in these kinds of crimes,” lied Yianoppoulos, claiming to audible audience gasps, “that’s not a controversial statistic.”

“You’re suggesting these people are the victims of some type of discrimination,” he continued. “I’m saying to you, this is a psychiatric disorder…like sociopathy or something, you know? I don’t want these people around little girls in bathrooms.”

After Maher suggests that Yianoppoulos doesn’t have to fight all the time, he starts insulting the IQ of the other guests.

“You can go fuck yourself, all right?” Wilmore replied, to raucous cheers, defending fellow guest counter-terrorism expert Malcolm Nance adding, “he can talk circles around your douchey little ass from England.”

He then added a bonus “Go fuck yourself” for comedian Leslie Jones.

But some Republicans don’t seem much happier with Yianoppoulos, who was recently announced as the keynote speaker for the upcoming Conservative Political Action Conference, which is hosted by the American Conservative Union (ACU).

“We were never consulted until after the invite,” one ACU board member, who requested anonymity, told Washingtonian. “If I hadn’t been in the offices and asked questions, [I] would never have had any clue. I threw a hissy fit.”

Another unnamed board member reacted with surprise when contacted by Washingtonian, saying the board hadn’t even met in six months.

In his remarks on Friday’s “Real Time” Yianoppoulos also said, “I don’t know if I’m conservative.”

He told The Hollywood Reporter his remarks would focus on  his “experiences in America battling feminists, Black Lives Matter, the media, professors and the entertainment industry.”