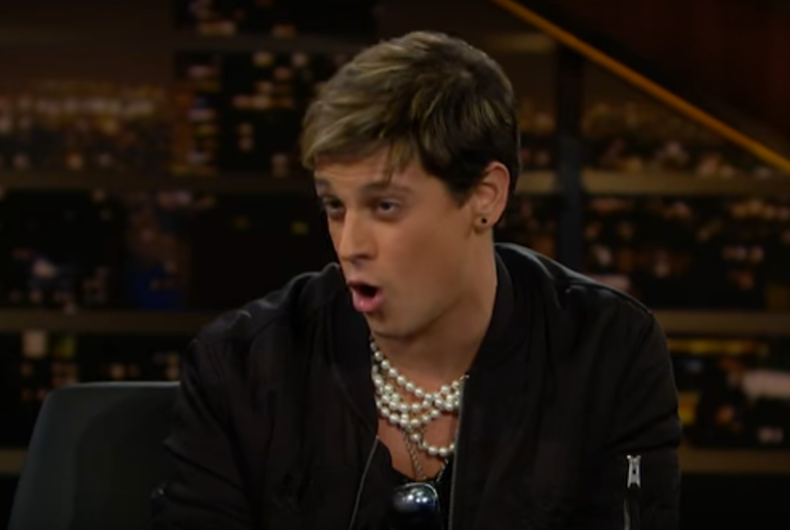 Rightwing gadfly and troll Milo Yiannopoulus quickly fell out of the public eye after flaming out in a dramatic manner following comments that appeared to condone pedophilia. While he denied the allegations, the fallout was quick.

He lost a book deal, financial backers, and speaking engagements as his former supporters in Trumpland quickly canceled him. His social media accounts were shut down over his nonstop offensive trolling and the conservative provocateur was left with no one to provoke.

But like the GOP nationwide, Yiannopoulus is turning to the religious right for personal salvation. Or is he simply trolling them too?

Yiannopoulus frequently spouted off far-right talking points and insulted transgender people frequently because it got him attention. Trolling became his forte and the MAGA mob ate up the flamboyant gay man trying to emulate Donald Trump and regurgitating right-wing talking points with a catty spin.

But after his former followers turned on him and his audience dried up, Yiannopoulus made tearful videos bemoaning how poor he’d become.

“I spent years growing and developing and investing in my fan base, and they just took it away in a flash,” Yiannopoulos posted on a conservative messaging app after being deplatformed by conservatives in 2019. “It’s nice to have a little private chat with my gold star homies but I can’t make a career out of a handful of people like that. I can’t put food on the table this way.”

Now he’s done an interview with the religious right site LifeSite News, and while the outlet seems to take him at face value, the gadfly’s typical exaggeration, outright lies, and over-the-top asides insinuate that he’s trolling them too. He’s now claiming that he’s “ex-gay.”

“When I used to kid that I only became gay to torment my mother, I wasn’t entirely joking,” Yiannopoulus says. “Of course, I was never wholly at home in the gay lifestyle — Who is? Who could be? — and only leaned heavily into it in public because it drove liberals crazy to see a handsome, charismatic, intelligent gay man riotously celebrating conservative principles.”

“That’s not to say I didn’t throw myself enthusiastically into degeneracy of all kinds in my private life. I suppose I felt that’s all I deserved. I’d love to say it was all an act, and I’ve been straight this whole time, but even I don’t have that kind of commitment to performance art.”

Yiannopoulus describes himself as an action hero and claims his husband has been “demoted to housemate.” And while he may have been complaining about his finances online previously, in the interview he’s suddenly fabulously wealthy again – or trolling them.

“It helps that I can still just about afford to keep him in Givenchy and a new Porsche every year. Could be worse for him, I guess.”

Yiannopoulus spouts off some Catholic pablum from Christian authors during the interview, insults transgender people, and insinuates that he wants to hang drag queens who read stories to kids at libraries. The outlet just published it.

“I have enjoyed a lifelong affection for the absurd and the outrageous, so part of me gleefully anticipates the day I can seize the moral high ground, however briefly, to denounce others for failures of piety and sobriety. I hope people will support and pray for me, if for no other reason than they share my delight at the prospect of Milo Yiannopoulos furiously and indignantly railing against homosexuals for sins of the flesh.”

“They say if you let one sin in, others will follow, and now I truly know what that means: As I’ve begun to resist sinful sexual urges, I’ve found myself drinking less, smoking less … you name it. I confess my weakness for designer shoes and handbags is yet to dissipate,” Yiannopoulus added. “But I am coming to realize, however slowly, that lust — per Augustine — is disordered desire for all sorts of things, not just NFL players.”

Yiannopoulus has tried to make his life performance art. But is the religious right gullible enough to give him a second act?