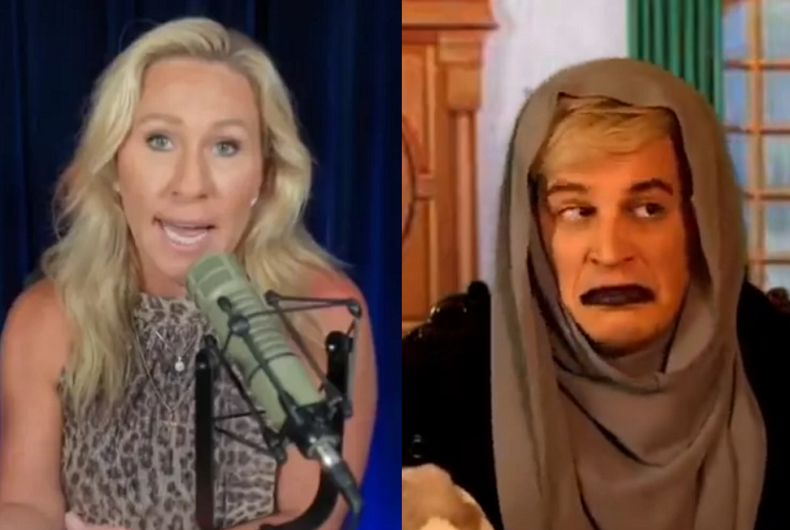 In the video, Yiannopoulos uses what sounds like a thick Boris-and-Natasha accent while speaking as Omar, who is actually from Somalia and who speaks English with barely any accent at all.

“Being first Muslim woman in Congress of United States,” Yiannopoulos said in broken English, spitting on the ground to imply that Omar hates America. “It’s not easy, but I make it work by sprinkling a little Sharia into Congress every day like sugar.”

People can be heard laughing off-camera and Yiannopoulos is kneeling next to a man who is playing Omar’s husband.

Yiannopolous jokes that, as Omar, he never has to make decisions because she just asks her husband what to think.

“It’s easy as a feminist never had to decide, do I take my husband’s surname because we both got the surname from my dad,” Yiannopoulos said, referencing an outrageously racist and false rumor that Omar married her own brother. Rep. Lauren Boebert (R-CO) and other extreme Republicans have repeated that rumor in the past to show their disdain for the Muslim Congresswoman.

He ends the video by turning to the other man and saying, “Baby, let’s go for walk.” The other man puts a leash around his neck.

Yiannopolous rose to fame on the right by attacking transgender people and he got himself banned from Twitter for harassing actor Leslie Jones for her role in the Ghostbusters movie. He was out as gay at the time and made it a central part of his act.

In 2017, Yiannopoulos was fired from Brietbart News after videos surfaced featuring Yiannopoulos condoning statutory rape and sexual relationships between boys and men. While defending himself, Yiannopoulos revealed his own relationship with a 29-year old man while he was 17. The age of consent in the U.K. is 16.

In the fallout, Yiannopoulos lost his job and a book deal. A scheduled speaking engagement at UC Berkeley was canceled after students’ protests turned violent.

Yiannopoulos claimed that he was so devastated by Donald Trump’s loss in the 2020 elections that he renounced homosexuality several months later, a performance he made complete by allegedly throwing a $150,000 “sodomy stone” engagement ring into the ocean.

Last week, Yiannopoulos was spotted working with Rep. Greene and speculation began on whether he was working for her.

“There would be a lot of people I’d love to invite to this roundtable. I see someone standing behind you right there – Milo Yiannopoulus – I think he’d be a great person to have there,” Greene said.

Greene confirmed that Yiannopoulos was working for her as an unpaid intern this past Monday: “So I have an intern that was raped by a priest as a young teen, was gay, has offended everyone at some point, turned his life back to Jesus and Church, and changed his life. Great story!”

She has not commented on her intern’s video.

Police are refusing to provide security for this city’s Pride. It might get canceled.

What does it mean to be transfeminine?