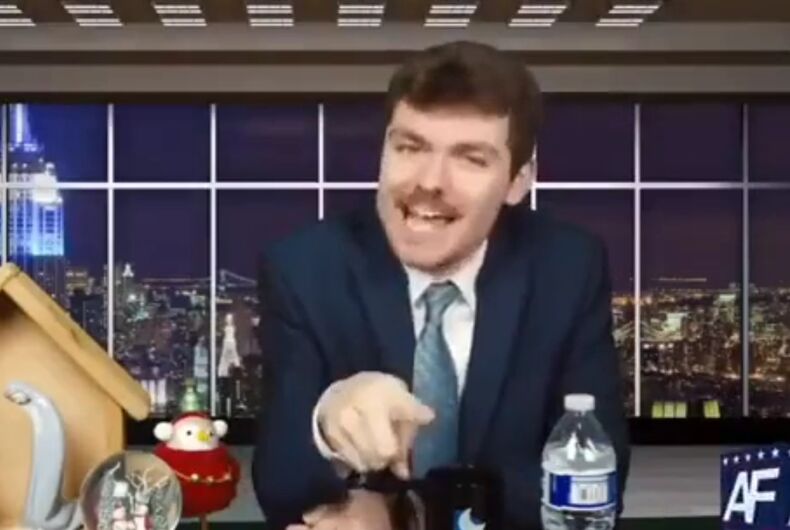 Prominent white supremacist Nick Fuentes is claiming that men and women having sex with one another is gay, and that being celibate is the only way for a man to truly be straight.

Related: Lauren Boebert & Marjorie Taylor Greene almost got in a fight & had to be separated

Nick Fuentes is one of the most prominent white supremacists in America. He’s a former YouTuber (he got banned for violating its hate speech policy) and now hosts a a podcast called America First.

He also describes himself as an incel, or involuntary celibate. It’s a subculture of mostly straight men who say that they’re too unattractive to women to have romantic involvements with them and is characterized by both violent misogyny and ridiculous levels of self-pity.

Earlier this year, Fuentes admitted to his followers that he kissed a girl when he was in high school, which made him lose incel credibility. He said that he never wanted to kiss a woman again, which only fanned the flames since that makes him a voluntary celibate pretty much by definition.

So on America First, he defended his identity as an incel.

“Gay people do date girls all the time,” he said. “All these gay people are coming out and saying, ‘I’ve had more girlfriends than Nick. I’ve had sex with more girls than Nick.’”

“That actually makes me really more heterosexual than anyone,” Fuentes said.

“The only really straight heterosexual position is to be an asexual incel,” he said, not using the term “asexual” correctly (asexual people aren’t attracted to any gender, whether or not they’re celibate). “That’s it. That’s all there is. Being a MGTOW [men going their own way, another word for the misogynist online subculture] incel is really the straightest position that you can have.”

“Having sex in itself is gay, I think. I think that it’s really a gay act,” he said. “I think, really, I’m like the straightest guy.”

Nick Fuentes: "having sex with women is gay" from ToiletPaperUSA

He has been described as a white supremacist by the Anti-Defamation League (ADL) and is an open supporter of the Taliban because it’s a “conservative, religious force.” Fuentes has compared Jews being burnt in concentration camps during the Holocaust to cookies baking in an oven.

Fuentes is also the leader of the “Groyper Army,” a group of far-right and racist internet trolls.

Fuentes participated in rallies leading up to the January 6, 2021 Capitol Insurrection, where Trump supporters tried to violently overturn the results of the 2020 presidential election.

“It is us and our ancestors that created everything good that you see in this country,” Fuentes said at a rally before the attack. “All these people that have taken over our country—we do not need them… It is the American people, and our leader, Donald Trump, against everybody else in this country and this world… Our Founding Fathers would get in the streets, and they would take this country back by force if necessary. And that is what we must be prepared to do.”

He later claimed he was the victim of “overt political persecution” when his bank account was frozen after the insurrection and he was placed on a no-fly list.

Fuentes frequently clashes with other conservatives who he claims aren’t conservative enough. He has said that “the GOP is run by Jews, atheists, and homosexuals” and called homosexuality and trans identity “deviancy.”