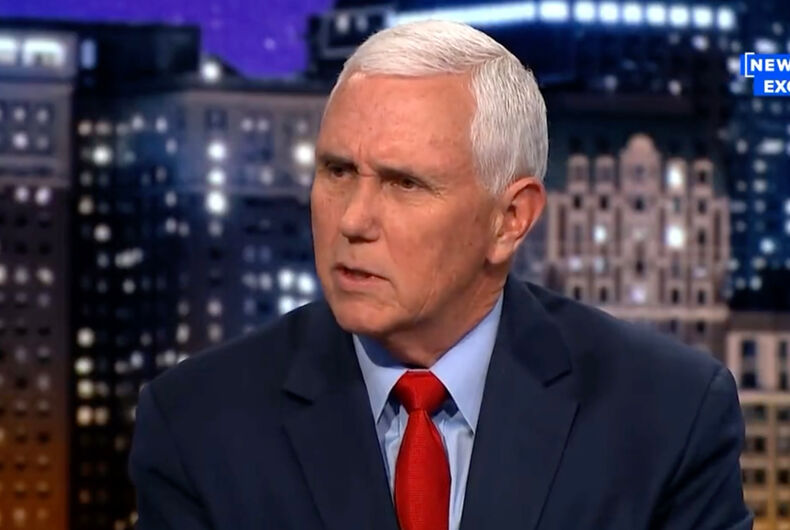 Mike Pence has called on former President Donald Trump to apologize for a dinner he had last week with Kanye West and Nick Fuentes, a white supremacist, antisemite, and Holocaust denier. This is one of the few times that Pence has publicly distanced himself from Trump.

In an interview on NewsNation Monday night, the former vice president said that Trump “was wrong to give a white nationalist, an antisemite and Holocaust denier, a seat at the table. I think he should apologize for it, and he should denounce those individuals and their hateful rhetoric without qualification.”

On November 22, Trump hosted a dinner with West, Fuentes, and political operative Karen Giorno at his Mar-a-Lago resort. According to The New York Times, West, who has received widespread condemnation for his own recent antisemitic remarks, brought Fuentes with him to Trump’s Palm Springs club. Trump has also released several statements insisting that Fuentes was West’s guest and that the former president had no prior knowledge of who Fuentes was.

In recent years, Fuentes has become one of the most prominent white supremacists on the American far right. The former YouTuber was banned from the platform for violating its hate speech policy, and now hosts a podcast called America First on which he openly uses hate speech. Fuentes also runs the annual America First Political Action Conference (AFPAC), a white supremacist event that has hosted Rep. Marjorie Taylor Greene (R-GA) as a speaker.

Described as a white supremacist by the Anti-Defamation League, Fuentes participated in rallies leading up to the January 6, 2021, Capitol Insurrection. He is the leader of the “Groyper Army,” a group of racist internet trolls, and has said that he supports the Taliban because it is a “conservative, religious force.” A Holocaust denier, in recent weeks he has called for the military to be sent into Black neighborhoods and demanded that Jews leave the U.S.

On Monday, Fuentes joined West and ex-gay white supremacist internet troll Milo Yiannopoulos for an appearance on Timcast IRL, a YouTube show with 1.4 million subscribers. When host Tim Pool pushed West on his recent antisemitic comments, the rapper stormed out, followed by Yiannopoulos and Fuentes.

West is reportedly planning a presidential run in 2024, with Yiannopoulos working on his campaign.

Tim Pool is currently hosting a blatantly anti-Semitic stream on Youtube with Milo, Nick Fuentes, Kanye West. They are all discussing how the "Jews control everything." Why is @YouTube hosting this? pic.twitter.com/QnyyFs6f66

During his NewsNation interview, Pence, who is promoting his new book and reportedly considering his own 2024 presidential run, stopped short of accusing Trump of antisemitism.

Mike Pence calls on Trump to apologize for meeting with a “white nationalist, an anti-Semite, and a Holocaust denier”. (Video: NewsNation) pic.twitter.com/ksSM42z1Yu

World Health Organization changes the name of “Monkeypox” to “mpox”

Spoiler Alert: There’s a new gay dramedy you need to go see as soon as it opens