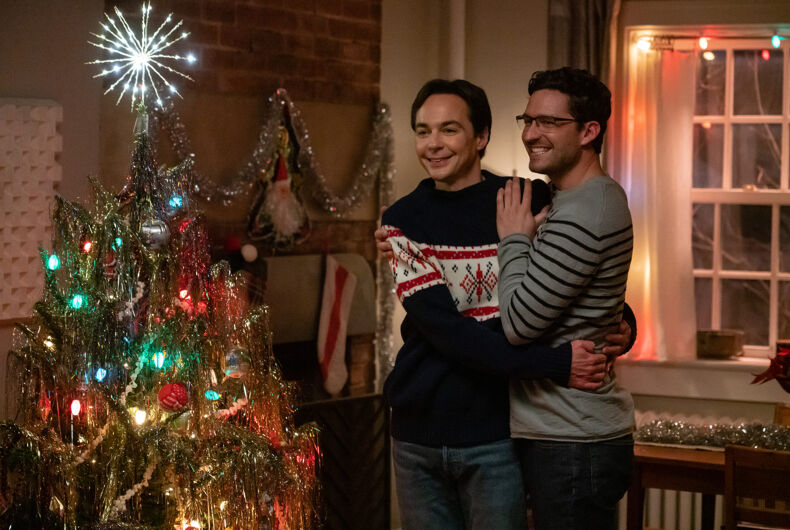 The essential thing to know about Spoiler Alert is that, unless you have a shriveled raisin-sized heart, you’re almost certainly going to cry. Directed by Michael Showalter and starring Jim Parsons, Ben Aldridge, and Sally Field, the film is based on TV journalist Michael Ausiello’s heartbreaking and hilarious 2017 memoir Spoiler Alert: The Hero Dies. It depicts Ausiello’s (Parsons) 13-year relationship with photographer Kit Cowan (Aldridge), through all their ups and downs, to Kit’s eventual diagnosis with a rare and aggressive form of cancer and his untimely death in 2015.

In a year when gay rom-coms have dominated the conversation, Spoiler Alert is a rare gay dramedy in the tradition of Steel Magnolias and Terms of Endearment. “I want people to be entertained. I want them to be moved,” Ausiello says of the film.

The author, who was also an executive producer on the film, recently chatted with LGBTQ Nation about seeing the happiest and most difficult time in his life play out in a kind of queer film we rarely get to see.

What was it like seeing your story onscreen, watching other people reenact things that actually happened to you?

Absolutely surreal. But also incredibly exciting and thrilling because the people doing that were people I admire, and in the case of Sally Field, someone I have looked up to my entire life. It was…wonderful, and more than anything I was just grateful—grateful to have gotten that far into the process and to be surrounded by all these amazing artists and telling this story. It’s remarkable.

Ben Aldridge plays Kit, and it’s remarkable how much he looks like him. What was that like, watching him in that role?

It’s crazy, because he’s so Kit-like. It caught me by surprise, I’ll be honest, even being there every day during filming. I got the sense that he was capturing Kit’s essence, but not until I saw the movie in its finished form did it really hit me how beautifully he captured him. And part of it is because, yes, he does look like Kit. But it’s more than that. He captured Kit’s spirit in many scenes that were eerily similar to the actual experience. Like the scene in Ocean City, New Jersey, with the bubbles—which we have actual video of that moment with Kit. And seeing Ben embody Kit during that moment, and do it so beautifully, it’s almost unsettling. It is a little bit like he’s been reborn.

For the most part, though, despite those parallels, I also think there’s enough different about what Ben brought to Kit and what Jim brought to me to allow me to know the difference and feel the difference and not really always feel like I’m seeing my life be replayed in front of my eyes. They put their own stamp on “Michael” and “Kit,” and they did so beautifully.

Jim Parsons plays you in the film. Obviously, he was a huge TV star on The Big Bang Theory. So, as a TV journalist, did you have a relationship with him before he was cast?

I interviewed him fairly regularly, because I was a huge Big Bang Theory fan. I think Big Bang Theory started when I was at Entertainment Weekly, and then for much of its run it was on when I was at TVLine. But I covered it. It was my show. I interviewed Jim probably almost a dozen times over the years, many of which were in-person interviews, and we had an amazing rapport. We were in sync in so many ways, particularly in terms of our snark. We share the same snark DNA, and that made interviewing him really fun. It’s also the reason why I reached out to him when I needed to find someone to moderate the Q&A at Barnes and Noble in Los Angeles when my book came out. I asked him if he would do it because I thought it would be fun to have the tables turned and have him interview me for a change. Little did I know that that set in motion him optioning the book and bringing us here today.

Did the two of you meet up or have any conversations about him playing you?

We didn’t actually have many conversations. Jim has said this himself: so many of the questions he had about playing me were answered in the book. And he often would turn to the book as his guide throughout this process even though I was on set every day and available to him. Because he wasn’t doing an impersonation of me, because he was creating his own version of the role, neither one of us were hung up on those small details. It’s not like I was in a corner going, “That’s not how I laugh!” I was never precious about those details. He certainly wasn’t interested in replicating those details. So, I think he felt a certain comfort to do his own thing.

So, I’m sure this is something people have asked you before about the book, but one of the things about the film that really stuck with me was this question of whether Michael and Kit would have stayed together if Kit hadn’t gotten sick. I mean, I’m curious if your thoughts on that have evolved over the years or if you think that’s even a worthwhile question to ask.

I think it’s a great question to ask. It’s not a question I get often. I don’t really think about it too much because obviously, how does that serve me to think about that? I will say, though, that before Kit got sick, we were in a fairly good place. We had navigated some difficulties in our relationship, and we get into this a little bit in the book. Kit getting his own apartment—which is just unheard of in a long-term relationship—really helped us. Giving him some space, making him feel less trapped in the relationship. And it was good for me too. We had some space from each other and came to appreciate each other more than I think we had in a while. So, that’s all I’ll say about that.

Another line that I really haven’t been able to stop thinking about is when Michael tells Kit that he never told him how good he looked in a pair of khakis because he was afraid he’d leave him. I’m not sure whether that line comes from your book, but speak a little about that line and what it conveys about the relationship?

Well, I think it says a lot. It does come from the book. It comes from Michael’s—from my—deep seated insecurities about body image, and the feeling that Kit could do better than me. And that insecurity hung over our relationship in ways that I now understand were profound and played a role, I think, in some of the conflicts that we had. I was afraid that by building him up I’d be tearing myself down or calling more attention to my vulnerabilities or the things about me that I was insecure about. And I regret that. I regret that I didn’t spend more time in our relationship building him up. And not building him up for the sake of building him up, but just being honest about how wonderful he was. And I mean that both superficially, like physically, but also beyond that. Insecurity is a shitty thing.

I think the reason those aspects of the story stuck with me, and one of the reasons why I like the film so much, is because I think they point to a kind of relationship and a kind of gay man that I’m not sure we see on screen very often. Does that…make sense to you? Do you think I’m off base?

Absolutely. I certainly haven’t seen it. I wish I’d see more of it, because that’s a story that I identify with, for sure. I think gay movies tend to feature chiseled, perfect, Adonis-looking gay men, and for folks who don’t feel like they belong to that group, you feel like an outsider. You feel like, Am I really part of the gay community if I don’t look like that? So, I think there’s something liberating being a gay man and talking openly and frankly about the fact that, no, I don’t have a perfect body and I’m still worthy of love. I think that really what it comes down to: believing that I’m worthy of love.

It’s been quite a year for gay stories on film. Fire Island, Bros. I’m curious if and how you think Spoiler Alert is going to figure into the discourse around gay films.

Oh, I can’t predict the discourse. Particularly the gay discourse. It’s so unpredictable. And I participate in it! I was a big fan of both of those movies that you mentioned—Fire Island and Bros. I’m excited to be in that company in an exciting year for gay films. But how we figure in…I don’t know. I want people to be entertained. I want them to be moved by our movie. Beyond that, I can’t predict.

Nonbinary government official accused of stealing luggage from an airport