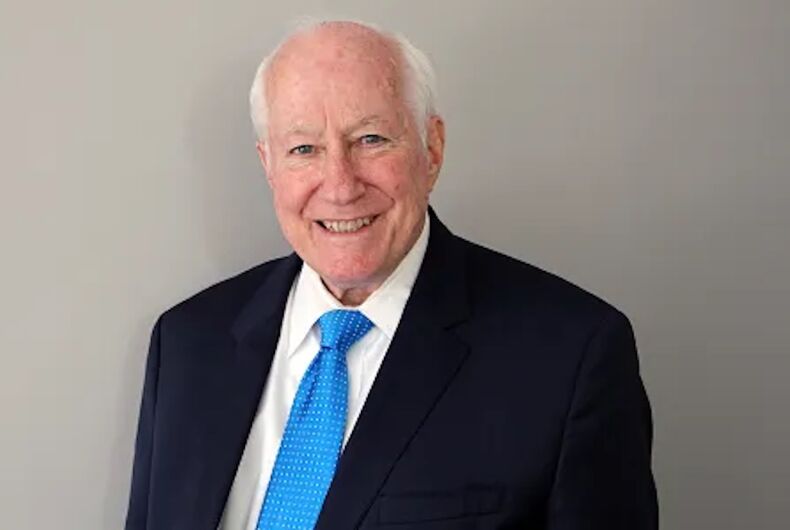 Jim Kolbe, an eleven-term member of Congress and the last out gay Republican to serve there, died Saturday at the age of 80.

Kolbe was a complicated figure in American politics, a moderate Republican who eventually drifted away from his party and a gay man who came out only under the threat of being outed for his political hypocrisy.

Kolbe, who represented a Tuscon-area district, was interested in politics from an early age, having served as a page for Sen. Barry Goldwater (R-AZ). But, unlike Goldwater, Kolbe was always a moderate by the standards of the day. He was first elected to the Arizona state legislature in 1976, where he supported such causes as the Equal Rights Amendment and tuition breaks for immigrants.

Kolbe’s first try for Congress, in 1982, came up short, but he defeated the Democratic incumbent two years later. Even though the district leaned Democratic, Kolbe managed to rack up comfortable margins in his re-election bids.

In large part, that was because Kolbe was, by all accounts, a likable person who believed in bipartisanship. “Jim had a way to listen to somebody even if he disagreed,” former Sen. Dennis DeConcini (D-AZ) told the Arizona Republic. “He paid attention like you’re important to me. He’s a wonderful man and such a decent guy. He was a typical congressman you could work with no matter what side of the aisle he was on.”

Kolbe had been married but divorced his wife in the early 1990s. That he was a gay man was an open secret in D.C., one that he didn’t take great pains to hide.

Then came the Defense of Marriage Act. Kolbe voted in favor of the bill, which defined marriage for federal purposes as only between a man and a woman.

The Advocate was on the verge of publishing a story outing Kolbe for his hypocrisy when he decided to out himself. “There is some relief,” he said at the time. “Certainly, there is some embarrassment.”

Outing Kolbe wasn’t exactly a slam dunk. He didn’t use right-wing homophobia to justify his vote, saying he just thought the states should decide the issues themselves, even though the bill prohibited federal recognition of marriages performed by progressive states. In other ways, he was supportive of gay and lesbian rights in a quiet, behind-the-scenes manner.

Over time, Kolbe seemed to have embraced his role as an out gay Republican. He repeatedly sponsored legislation to repeal Don’t Ask, Don’t Tell. He became the first gay man to address the Republican National Convention.

While Kolbe tried to remain true to the party, as it drifted farther to the right and into polarization, he was increasingly out of place. It wasn’t just that he was gay. He supported abortion rights and a pathway to citizenship for immigrants.

In 2013, he testified in support of legislation for a path to citizenship for immigrant same-sex partners. Kolbe was speaking from personal experience. His partner, Hector Alfonso, was a Panamanian who had to leave the country after his work visa expired because Kolbe couldn’t sponsor him under the law. Alfonso, whom Kolbe married in 2013, survives him.

By the time the Trump era rolled out, Kolbe was out of step with his party. He registered as an independent in 2018 and endorsed President Joe Biden in 2020.

Kolbe’s career wasn’t without scandal. In 2000, he learned about then-Rep. Mark Foley’s (R-FL) inappropriate messages with Congressional pages and informed the office that oversaw the pages. Unfortunately, that office did nothing, and when the scandal blew up six years later, leading to Foley’s resignation, there were questions about whether Kolbe should have done more to stop Foley.

There was also an investigation into a rafting trip involving Kolbe and two 17-year-old former pages, but the investigation turned up nothing. (Kolbe’s sister and five staffers were also on the trip.)

But when he finally came out after leaving Congress, Schock dedicated himself to partying. After he left Congress, Kolbe taught at the University of Arizona law school, was a fellow at the German Marshall Fund, a nonpartisan think tank focused on trans-Atlantic trade, and served on President Barack Obama’s Advisory Committee for Trade Policy and Negotiation.

It’s a sign of how much politics – and the Republican party – has changed.