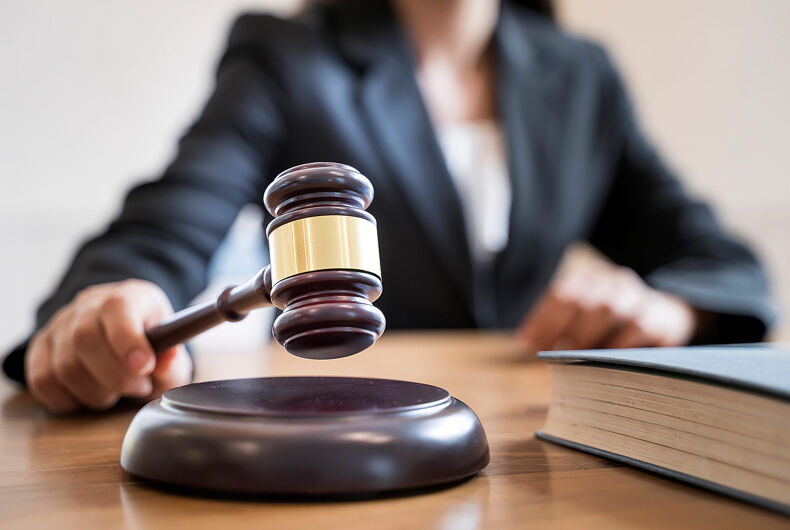 The first-ever group of trans attorneys has been admitted to practice before the Supreme Court.

On December 30, 10 members of the National Trans Bar Association (NTBA) from across the country stood before the court as part of the organization’s efforts to increase visibility for trans attorneys.

“We put together this group wanting to showcase to the Court the spectrum of legal talent that happens to be transgender,” said NTBA Co-Chair Lucas Cameron-Vaughn in a press release. “The message this will deliver is that attorneys who are transgender are just like every other group of attorneys: talented, dedicated, and working for clients across the nation.”

Update: it went well! Justice Brown Jackson was absolutely BEAMING at us and Alito looked very pissed ✅ no phones inside the courtroom of course but here we are! pic.twitter.com/k7FFfffGsW

The press release explained that the idea behind asking for the admission of this group to the Supreme Court came about after oral arguments during an anti-trans workplace discrimination case, R.G. Harris Funeral Homes v. EEOC. It was part of a group of three cases – Bostock v. Clayton County being the most well-known – that led to the Supreme Court’s landmark decision that anti-LGBTQ workplace discrimination is illegal under Title VII of the 1964 Civil Rights Act.

Browde realized the Court had no idea that there were at least six trans attorneys in the courtroom on that very day.

“It’s vital that we demonstrate to this group of justices, and to the nation, that one’s gender and presentation in no way affects the abilities or performance of that individual,” Browde said, “and, particularly, for those justices who have expressed views hostile to people who are transgender, I think it important to show that we are fully prepared to continue the battle for equality at all levels of the law.”

“Without equality there can be no justice.”

The attorneys had been waiting two years for their moment. Originally planned for 2020, the ceremony was delayed due to COVID-19.

Browde told Them that NTBA wanted to ensure a diverse range of attorneys were part of the cohort.

“We made sure there was every gender and color, a rainbow of transgender people. Some visibly trans, some not so visibly. We wanted them to see the community and be in their faces, and to me, that was the achievement. Saying to SCOTUS, this is us, and guess what? We’re just like you.”

For the first time a grip of attorneys who are openly transgender has been admitted to practice before the U.S. Supreme Court. #Trans #transgender #thisiswhattranslookslike #mtf #lgbtq #lgbt #🏳️‍⚧️ #rainbowmafia #equality #law #scotus

One of the cohort members was senior Lambda Legal attorney Carl Charles, who described to Them the different reactions of the justices.

Justice Ketanji Brown Jackson, he said, “was absolutely beaming at us, giving us the warmest and most welcoming smile. Justices [Sonia] Sotomayor and [Elena] Kagan also looked warmly in our direction when the Chief Justice said ‘motion granted.’”

He added that the anti-LGBTQ conservative Justice [Samuel] Alito was less thrilled.

Nevertheless, Charles described the ceremony as “incredibly meaningful, both personally and professionally.”

“That there were so many of us, standing in solidarity together before an overwhelmingly conservative Court was, to say the least, a way to speak truth to power that is by all accounts not on our side.”

“Though I know we are not the first and certainly won’t be the last trans attorneys to be admitted to the Supreme Court, we were there to answer the call, to stand together when our names were called and say proudly, ‘We are here, and we are not going anywhere.’”

World AIDS Day is over. But the fight has to continue

Jim Kolbe, the last out gay Republican in Congress, has died