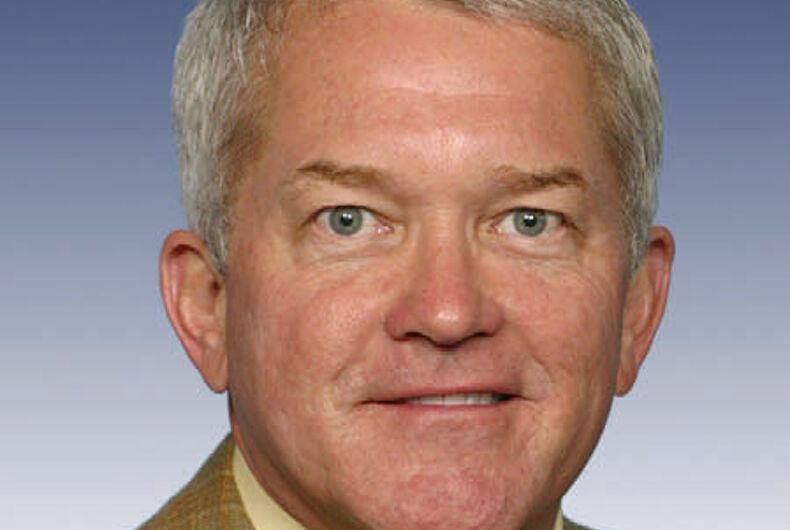 Proving that no offense is too great for Republicans to overlook, Mark Foley is apparently thinking about a political comeback.

In case you’ve forgotten or were unaware, in the early 2000s, Foley was a high-powered Republican in Congress, having first been elected from his Florida district in 1994. Then he ran into a bit of a problem: the story broke that he liked to hit on underage Congressional pages. Male pages, to be exact.

Unfortunately for Foley, he left a huge electronic trail because he liked to email or message pages with ideas that ranged from the suggestive to the explicit. In the latter category: asking a 17-year-old if he wanted to come over to Foley’s place for oral sex. Or asking another page for a picture of his erection. In several cases, Foley did have sex with ex-pages, but after they had turned 18.

Needless to say, Foley’s voting record in Congress was impeccably anti-LGBTQ. Ironically, given his prediliction for underage boys, Foley made opposition to child pornography one of his signature issues.

Foley was a classic example of someone in a glass closet. He was constantly being outed, and once held a press conference to describe the rumors that he was gay as “revolting” – while not denying them.

When the news of Foley’s behavior broke in October 2006, he quickly resigned, entering political oblivion. Prosecutors declined to charge him with any crimes.

He later admitted to being gay (he was in a decades-long relationship with a dermatologist) and entered rehab for alcoholism. He blamed his problems on being abused by a priest when he himself was underaged. The priest responded by saying that it was nothing more than “light touches here and there.”

Occasionally, Foley would pop up, most notably behind Donald Trump at a campaign rally in 2016.  But now Foley is apparently hoping that the president has proven that a sexual scandal is no barrier to election. In a recent response to the Federal Elections Commission, Foley said he’s thinking about running for office again.

There’s a reason why the FEC is so interested in Foley’s future. When Foley left office, he had more than $1.7 million in unspent campaign funds. Under federal law, Foley was under no obligation to return the money to donors. He could transfer it to other candidates, if he wanted. He just couldn’t use it on personal expenses.

The FEC wondered why someone who has been out of politics for a dozen years was hanging on to a big pot of campaign money. As it turns out, Foley has been spending the money on buying himself visibility: purchasing tickets for fundraisers and dinners at Palm Beach events. Those are all legal expenses.

“Mark Foley reserves his right to seek election to a federal office at a future date and anticipates making a final decision sometime following the reapportionment resulting from the upcoming decennial census,” Foley’s CPA told the FEC.

That would mean Foley would be hitting the campaign trail in 2022, 16 years after he left office and about the same timespan as the pages he used to hit on.

Whether Republicans would have an appetite for a creepy predator like Foley is an open question. Roy Moore lost his Alabama Senate campaign in 2017 because of his apparent fondness for underaged girls. On the other hand, the current president of the United States has been credibly accused of rape and a long list of other sexual assaults, and no one seems to care.

The bigger problem for Foley in today’s GOP is that he’s now openly gay. The irony may be that his past scandal isn’t as disqualifying to Republican voters as being out is.

Nicki Minaj cancels appearance at Saudi music festival. But why was she going to perform at all?