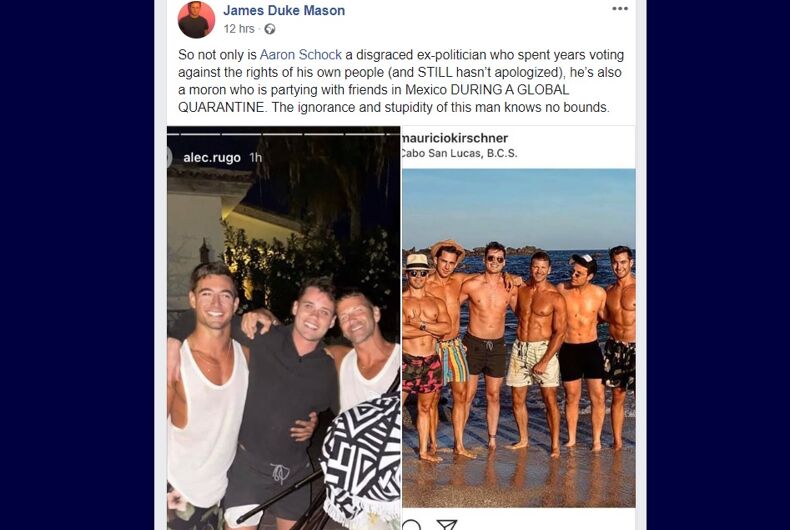 Images of the former Republican Congressman were shared on social media.Photo: Screenshot/Facebook

Disgraced former Rep. Aaron Schock (R-IL) made a name for himself in the U.S. House as a solid vote against LGBTQ equality.

But now he’s been caught spending his “self-isolation” the only way he knows how: partying with shirtless, hairless, muscular men at a resort in Mexico.

Schock, 38, was in the U.S. House from 2009 to 2015. He wasn’t out at the time and he earned a 0% rating on HRC’s Congressional Scorecard by voting against every initiative that would have benefited LGBTQ people, including ending the ban on gay and bi people in the military and against expanding hate crimes legislation to include sexual orientation and gender identity.

In 2015, he resigned during a scandal that involved allegations of that he spent public and campaign funds inappropriately.

Since then, he has been spotted at gay resorts, putting money in male dancers’ underwear, and making out with a boy while putting his hand down his pants. He came out on social media last month, but didn’t apologize for his previous harm to the community.

Now he’s hanging out at a resort in Mexico with other gay men, one of whom posted pictures of the group to social media. LGBTQ Nation contributor James Duke Mason caught a screenshot of the posts and shared them on Facebook.

“BE MY QUARENTINE [sic],” wrote Mauricio Kirschner in a post that says he’s in Cabo San Lucas on the Mexican Riviera, along with a photo of several shirtless men, one of which is Schock.

The other picture Mason shared is from someone named Alec Rugo, and Schock is in it as well.

On Twitter, NY Magazine contributor Yashar Ali noticed that one of the men in the group tagged an Instagram post with #stayathome, even though he was quite clearly not at home and at a resort that serves a nice breakfast.

Also on Twitter, Buzzfeed‘s Sam Stryker commented that the group has “a very different definition of ‘social distancing’ than the rest of us!”

This group of Instagays “quarantining” at a resort in Mexico – WITH Aaron Schock – seem to have a very different definition of “social distancing” than the rest of us! pic.twitter.com/BeMUrBglIi

Stryker also found another post from Rugo, one of the men partying with Schock, where he used the n-word and called for the impeachment of former President Barack Obama in 2014. He did not explain what the grounds for impeachment would be.