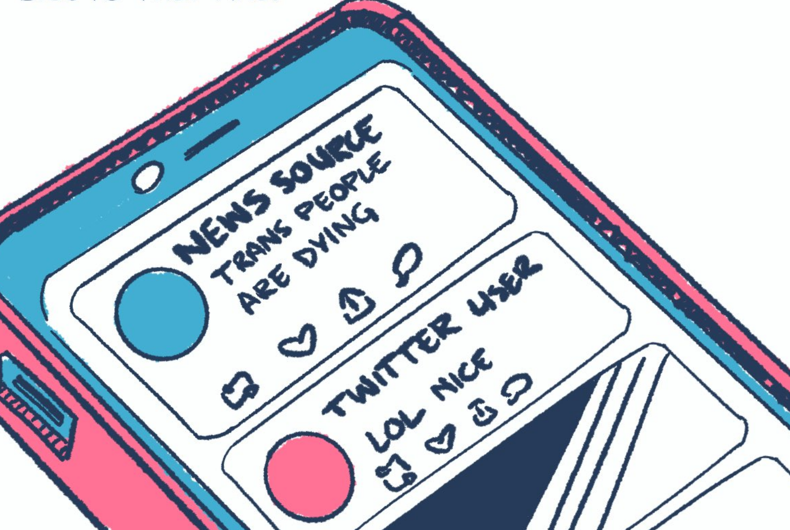 This week, LGBTQ Twitter has been flooded with reaction to the Florida Senate’s passage of the so-called “Don’t Say Gay” bill, which would limit the ability of school staff to discuss LGBTQ issues and identities.

Related link: “Say Gay” is trending as everyone speaks out against Florida’s Don’t Say Gay law

Mark Hamill has something to say about it. And it’s gay.

And despite some folks discomfort with that statement, Hamill won’t be censored.

Thanks for informing me of the complaint from the German people- I had no intention of violating the Network Enforcement Act & am relieved to learn that tweeting the word "gay" 69 times with a rainbow emoji is NOT subject to removal under the @Twitter rules or German law ❤️-mh pic.twitter.com/0EJPFtvlFP

Glennon Doyle (wife of soccer star Abby Wambach) is hoping others will join in.

George Takei called out the hypocrisy of not prohibiting cisgender people from accessing gender-affirming therapies.

Let’s be honest. These new laws are rooted in ignorance and bigotry toward trans people.

He also called out the lawmaker who suggested that being gay is a temporary state, reminding us all that while nothing lasts forever, he’s been gay for more than 84 years.

A Florida lawmaker got up to say that “gay” isn’t permanent. I’m not sure what she meant by that, since I’ve been gay for more than 84 years, but many of nature’s most beautiful creations, from rainbows to bursts of flower blossoms, don’t last forever. Just long enough to wow.

Lin-Manuel Miranda offered solidarity in three acts, concluding with: “Queer identity is beautiful & natural. Say it to yourself until you feel safe enough to say it out loud. Then say it again. And again. Say Gay all day. It needs to be heard and it bears repeating. All of you, ALL of you. Love is Love is Love.”

The Florida legislature passed a bad, backwards law with the goal to be cruel & to silence. LGBTQIA+ children, parents, siblings, neighbors, teachers & friends: We see you. Live every day with pride & go forward on your journey to self-discovery with your head held high. 1/3 -LMM

News flash: If you outlaw abortions, stop people from voting, ban discussions of sexual orientation and gender identity in classrooms, and criminalize providing gender affirming care for trans youth, you're not the party of "limited government."

Even Hillary Clinton chimed in, calling the bill an act of “performative cruelty.”

Florida's "Don't Say Gay" bill is the latest example of the performative cruelty that defines the GOP brand today. It will only serve to hurt children and families.

People who believe in freedom and equality should oppose these ugly measures at every opportunity.

Florida is just the on of many states grappling with anti-trans legislation. One trans comic summarized the state of trans folks in the United States right now through their art.

Sorry I haven’t had much to post lately. It’s kind of been the everything. CW for transphobia in the news, passing mention to trans su*cide rates. 1/2 pic.twitter.com/UxczyT1NxE

Meanwhile, in Texas, parents are starting to speak out about their experiences being investigated for supporting their child’s gender transition. This mom of a trans kid in Texas is under investigation by the state and running for her local city council.

Texas DFPS has an active investigation open against my family, has already interrogated us in our home, and is now threatening to remove our kids from their loving family. The reason? We are parents of a transgender child. Here is our story: https://t.co/tADdSjARu4

With everything that’s going on, Wonder Woman (Lynda Carter) made sure that trans women knew they were included in her International Women’s Day shoutout.

Today we celebrate women and girls from all walks of life… And yes, that includes our trans sisters! 😘

To be a woman is to be a wonder, but it's no wonder that we are so strong and full of possibilities. Happy International Women's Day! pic.twitter.com/PCaOdUH54j

Looking for ways to help address the wave of anti-trans legislation? Sigrid Ellis offers some options in this thread:

More anti-trans legislation is happening at a state level in the U.S.

Do not, please, do not pester your trans friends and family about what you can do to help.

They are underwater, they are drowning in fear and rage.

Here is a thread of what you can do to help: