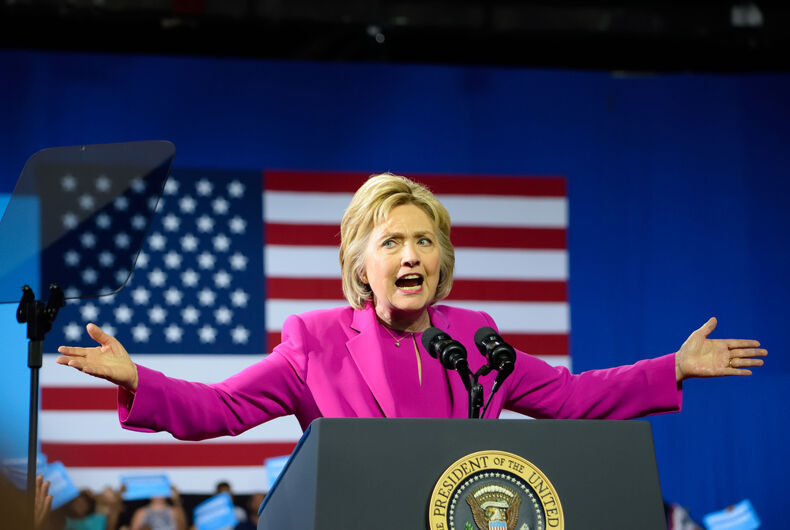 Former Secretary of State Hillary Clinton called out Republicans for calling themselves the party of family values while doing nothing of substance to help parents or children, specifically addressing the current GOP attempts to ban books about LGBTQ people and racism.

“Republicans will take tax cuts, like the child tax cut, and give them to billionaires,” Clinton said at the New York State Democratic Convention. “Republicans will claim they’re on the side of parents and family values but they will do nothing for actual parents or families.”

Related: 5 books that should be immediately banned from schools for promoting heterosexuality

“Nothing on childcare, nothing on paid leave, nothing to help working moms and dads get by and get ahead,” she continued.

“They will do nothing to invest in our schools or make college more affordable. They’ll ban books but do nothing about guns.”

Hillary Clinton goes in on the GOP: ‘Republicans will claim they’re on the side of parents and family values, but they will do nothing for actual parents … nothing on child care, nothing on paid leave … they’ll ban books but do nothing about guns’ pic.twitter.com/9v3EJ3I4Qz

Clinton was referring to attempts in several red states to either ban entire subjects from schools – especially discussions of LGBTQ people or the history of racism in the U.S. – and to ban books from libraries that deal with those two topics as well.

In Texas, the Republican governor is campaigning on a “Parental Bill of Rights” that could ban LGBTQ content from schools after a GOP lawmaker in the state told schools to document if they have any books in their libraries that could cause “psychological distress.” The lawmaker listed 850 examples of inappropriate books, and the list included innocuous LGBTQ titles like My Two Uncles by Judith Vigna and And Tango Makes Three by Justin Richardson, which is about a baby penguin who has two dads.

And the fight has also taken place at the local level. Two school board members in Virginia several months ago suggested an actual book-burning of “bad, evil-related material that we have to be careful of.” One board member suggested they “see the books before we burn them, so we can identify within our community that we are eradicating this bad stuff.”

In Illinois, conservative parents protested a school board meeting, claiming that a book in the library “teaches kids how to be gay.”

Meanwhile, only 18% of Republicans say that gun violence is a very big problem for the country, even though the number of children and teenagers killed by gunfire has been rising during the pandemic because of pandemic gun-buying. Not even a majority of Republicans support banning assault-style weapons, which are often used in mass shootings.