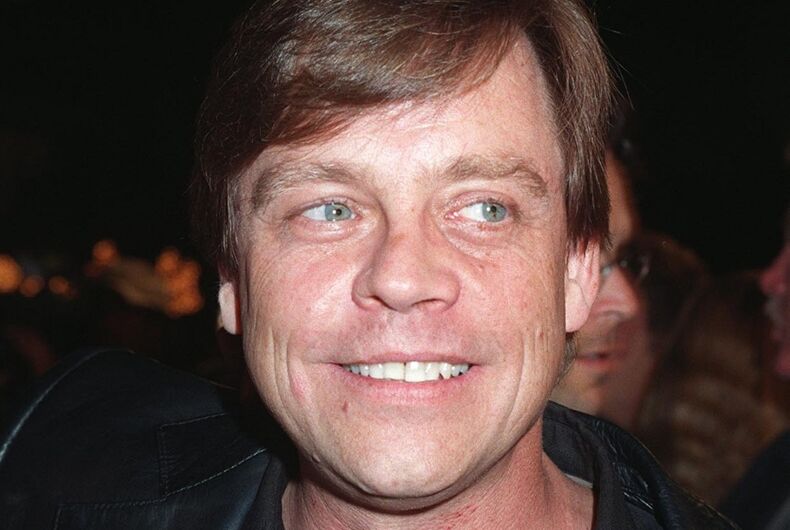 Mark Hamill at the 1997 premiere of "Starship Troopers."Photo: Shutterstock

Mark Hamill – the actor who played Luke Skywalker in the Star Wars films – tweeted a sweet poem about romance between two male characters in the film franchise.

Star Wars hasn’t had much in the way of same-sex lovin’, although there is a brief shot of two women kissing in Star Wars: The Rise of Skywalker.

This has led to some fans hoping for a romance between John Boyega’s and Oscar Isaac’s characters Finn and Poe Dameron, but that wasn’t a part of the latest Star Wars film.

That hasn’t stopped some fans from hoping, and Hamill seems to be pretty cool with the idea. So cool that he tweeted a poem about it with a rainbow and the hashtag #LGBTerrific.

So what they do behind closed doors

But I would like to also note that love is love

Whatever floats your boat.

Luke never met either Finn or Poe
So what they do behind closed doors
I guess I'll never know…
But I would like to also note that love is love
Whatever floats your boat.#LGBTerrific 🌈 https://t.co/swT1F1UsOG

The isn’t the first time Hamill has supported LGBTQ equality. In 2016, he said that his character Luke Skywalker is gay if fans want to believe he is.

“If you think Luke is gay, of course he is,” he told The Daily Beast. “You should not be ashamed of it.”

And just last month, he called J.K. Rowling’s support of a woman who lost her job due to anti-transgender tweets “transphobic.”