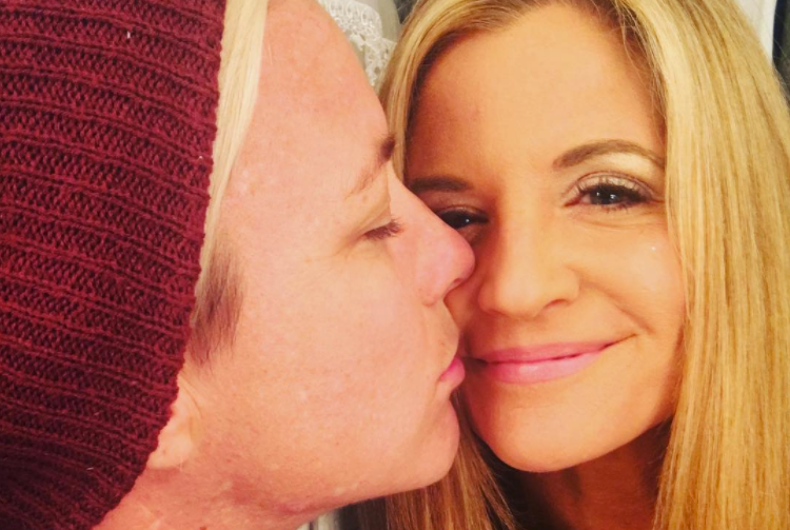 The unlikely couple announced they were dating last November, shortly after Melton and Wambach ended their marriages, to a man and a woman, respectively.

Feels like the world could use all the love it can get right now. So today, I'm sharing with you my new love. https://t.co/3KuDQ4e0Su pic.twitter.com/6vvxBqNUj4

Melton, who writes the blog Momastery, is best known for her New York Times bestseller Carry On, Warrior: The Power of Embracing Your Messy, Beautiful Life and 2016 memoir Love Warrior, which was selected for Oprah’s Book Club.

While the two might not seem to have a lot in common — Wambach has been dating girls since high school and Melton has never openly been in a same-sex relationship — the two share a Christian faith and struggles with addiction.

Melton has written about her drug and alcohol addiction at length, while Wambach recently came to terms with her own struggles after she was arrested for driving under the influence.

And while Melton married her ex-husband after becoming pregnant with their first child, she has long expressed support for same-sex marriage, despite backlash from other Christians. Wambach told NPR last September that she’s been revisiting her Catholic roots after years estranged.

“I kind of turned my back away from the church and did steadily until kind of, not necessarily the church, but just like my faith until recently,” she said.

And while the couple’s romance has developed quickly, Melton shared on Facebook that her ex-husband is supportive of her relationship, and joins in together in family activities.

“They’re lucky kids, to be surrounded by so much love. We have family dinners together — all six of us — and Abby cooks,” Melton wrote. “We go to the kids’ school parties together. We are a modern, beautiful family. Our children are loved. So loved. And because of all of that love, they are brave.”