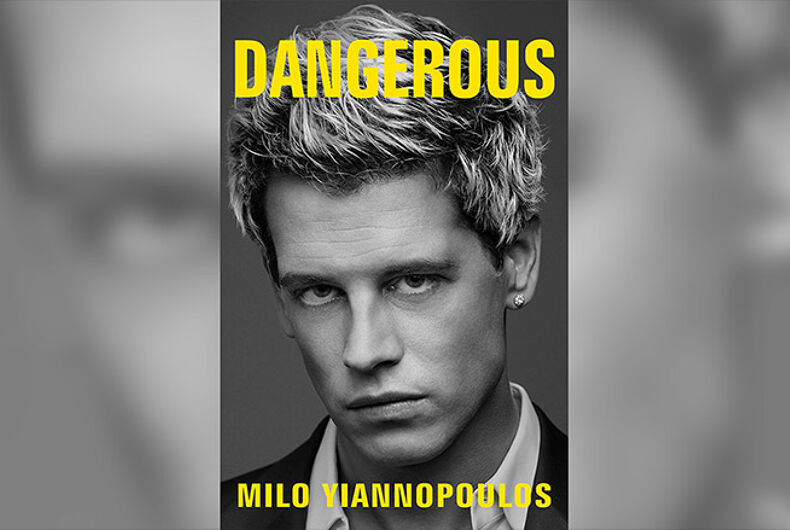 Simon & Schuster will not publish the forthcoming book by out Breitbart editor, Milo Yiannopoulos, the transphobic, racist, misogynist and homophobic troll who has been all over the news this holiday weekend.

Statement: After careful consideration @simonschuster and its @threshold_books have cancelled publication of Dangerous by Milo Yiannopoulos

But the world has not heard the last of Yiannopoulos, apparently. Monday evening, he posted an announcement on his Facebook page to herald a news conference Tuesday in New York City.

After Yiannopoulos appeared on Bill Maher’s HBO live program, “Real Time,” and its YouTube “Overtime” segment Friday night — during which transgender Americans were made the objects of scorn and derision by both host and guest — news spread that he would deliver the keynote address at this year’s conference of the American Conservative Union. That decision was roundly criticized by hardline conservatives and apparently made without the approval of the ACU board.

And by Monday afternoon, CPAC withdrew its invitation.

But the real bombshells were the accusations of defending pedophilia, to which Yiannopoulos referred in his announcement of Tuesday’s news conference. They first appeared Sunday on Twitter, the social media service which banned him in July 2016 for leading a harassment campaign against actress Leslie Jones.

Yiannopoulos denied the accusations in a Facebook post on Monday, saying the videos tweeted by his Republican accusers were “deceptively edited.” He followed up with a longer, more detailed denial hours later.

And he wasn’t done. This time he played the victim card.

But it all may have come too late.

Not long after CPAC disinvited him, Simon and Schuster dropped another bombshell, which Yiannopoulos and the publisher’s public relation representative confirmed: Dangerous, the book due to hit bookshelves on June 13, was canceled.

Yiannopoulos received a $250,000 advance for the book, and it’s not clear if Simon and Schuster will demand it back. As of press time, Yiannopoulos still had the cover of his book on his Facebook fan page.

And there may yet be more fallout. Citing two sources, Washingtonian magazine reports “at least a half dozen” Breitbart employees, where Yiannopoulos is senior editor, are demanding he be fired or else they plan to quit, en masse.

“The fact of the matter is that there’s been so many things that have been objectionable about Milo over the last couple of years, quite frankly. This is something far more sinister,” the senior editor told Washingtonian.

“If the company isn’t willing to act, there are at least half a dozen people who are willing to walk out over it.”

This is a developing story. Count on LGBTQ Nation to bring you the latest as it becomes available.

Hollywood’s sliding scale of justice for winning an Academy Award