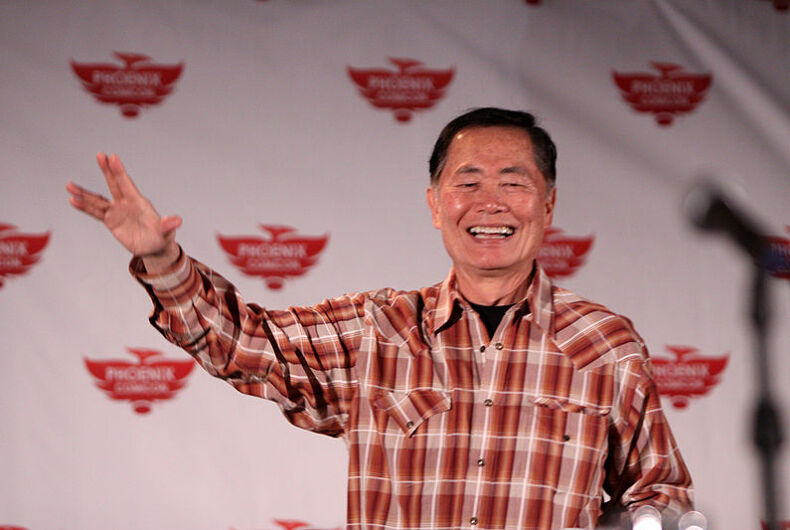 Out actor George Takei recently opened up about the challenges of being in the closet after watching his parents stand up for their own rights while incarcerated in a Japanese internment camp during WWII.

84-year-old Takei told The Telegraph about his and his family’s experience being forced to move to a camp when Takei was only five years old.

“Suddenly, out of the front window we saw two soldiers marching up our driveway,” he said. “They carried rifles with shiny bayonets on them, stopped at the front porch and with their fists began banging on the door.”

The camps, established by President Franklin D. Roosevelt, imprisoned those of Japanese descent on the grounds that they might be loyal to Japan and not the United States.

Takei said his parents refused to take a “loyalty oath” giving up any allegiance to Japan since they never felt loyalty to Japan in the first place. Their refusal resulted in their family being placed in the Tule Lake Camp in California.

Tule Lake was not only the largest of the 10 camps the U.S. established, but it was also the only one occupied by the Army and made into a maximum-security center under martial law.

Takei spoke of the struggle he felt keeping his sexuality to himself after seeing his parents speak out for what they believed in.

​​“It was torture being closeted because my instinct was to speak out,” he said. “My parents had stood their ground on the loyalty questionnaire. They were principled.”

He added that he felt “an immense sense of guilt in not standing up” for his sexuality, especially because he was standing up in other ways by participating in the successful fight for reparations for survivors of the internment camps.

Takei came out publicly in 2005 and revealed that he had been with his now-husband, Brad Altman, for almost twenty years.

He waited so long, he said, because of the horrible ways he watched Hollywood treat other gay actors.

He remembered when his idol, Tab Hunter, was outed by a gossip magazine.

“Suddenly he disappeared. Warner Brothers dropped his contract, vilified him, called him box-office poison. I was stunned. The lesson that I got from that was you can’t be an actor and be gay at the same time. And I passionately wanted to be an actor.”

Takei says things have gotten better, but there is still work to be done.

“There’s no denying we have made amazing progress in terms of telling the LGBTQ story and having LGBTQ performers now acting and maintaining a career. But…there’s always that ‘but’ in Hollywood and in America. Issues still remain.”

Strongman Putin is showing the world just how weak he is

Photo of the week: The queen has spoken