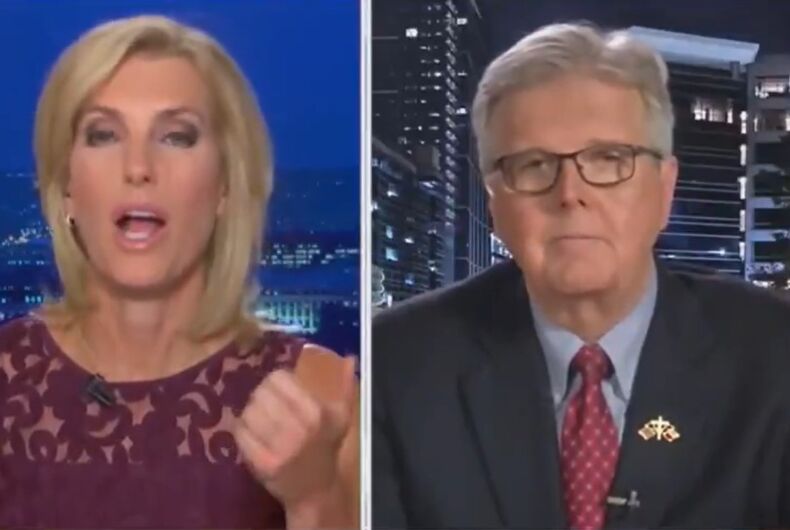 Virulently anti-LGBTQ Texas Lt. Gov. Dan Patrick (R) is now blaming the latest wave of the COVID-19 pandemic on Black people, saying that Black people – not white conservatives – are refusing to get vaccinated and spreading the virus.

Coronavirus is spreading out of control in the Lone Star State and last week Gov. Greg Abbott (R) even asked people to voluntarily delay needed surgery to create space for people showing up at hospitals sick with the virus. Abbott himself tested positive for the virus, even as he continues to oppose mask mandates.

His lieutenant governor was on Fox News last night and told Laura Ingraham that the problem isn’t the governor’s policies, but Black people.

“The COVID is spreading, particularly — most of the numbers are with the unvaccinated,” he said. “And the Democrats like to blame Republicans for that. Well, the biggest group in most states are African Americans who have not been vaccinated. Last time I checked, more than 90% of them vote for Democrats in their major cities and major counties.”

CDC data from this week shows that Black people make up nine percent of the people who have received a vaccine in Texas and 12% of the state’s population. This is the same discrepancy as found with white Texans, who make up 38% of the vaccinated population but 41% of the total population in the state.

Since there are many more white people in Texas than Black people, that three-percent discrepancy between the vaccination rate and population represents more white unvaccinated people.

Moreover, previous studies of COVID-19 vaccine hesitancy have shown that white people’s attitudes about the vaccine vary greatly with political identity. Only 18% of Democrats said that they will definitely not get the vaccine in a recent Kaiser Family Foundation survey while 58% of Republicans said they will definitely not get it. Over 80% of Republican voters are white.

This isn’t the first historically oppressed minority that Texas’s leadership has tried to blame for the results of their pro-COVID policies. The Biden administration is suing the state over Abbott’s order for state police officers to “stop any vehicle upon reasonable suspicion” of transporting immigrants, saying that immigrants are spreading the virus.

And instead of worrying about members of their party refusing to get the vaccine and filling up hospitals, Abbott and Patrick have been focused on rolling back transgender rights. They spent the first part of this month trying to get state legislators to ban transgender girls from participating in school sports, and Abbott lobbied the state’s Department of Family and Protective Services to declare that certain procedures that transgender children don’t even undergo are child abuse.

Patrick himself has been rather blasé about the COVID-19 pandemic since the start. In March 2020, he made headlines when he told Fox News’s Tucker Carlson that senior citizens should be sacrificed to keep the economy going.

“No one reached out to me and said, ‘As a senior citizen, are you willing to take a chance on your survival in exchange for keeping the America that all America loves for your children and grandchildren?’ And if that’s the exchange, I’m all in,” he said.

Patrick built a name for himself in Texas politics by being anti-LGBTQ. In 2017, he helped lead the charge to pass a bill to ban transgender people from using the correct restrooms. He was key to rallying Evangelicals to support the bill, an effort he has not since repeated to get his supporters vaccinated.

In 2016, just hours after the Pulse shooting in Orlando had left 49 people dead, Patrick tweeted, “Do not be deceived: God cannot be mocked. A man reaps what he sows.” He later deleted the tweet.

Two years ago during the Democratic presidential primary, Patrick called candidate Beto O’Rourke “light in the loafers,” an old expression that refers to gay men.

“You know, he flaps his arms around a lot,” Patrick said when pressed on why he used that expression.

Chicago alderman says he “identifies as a vaccinated person”