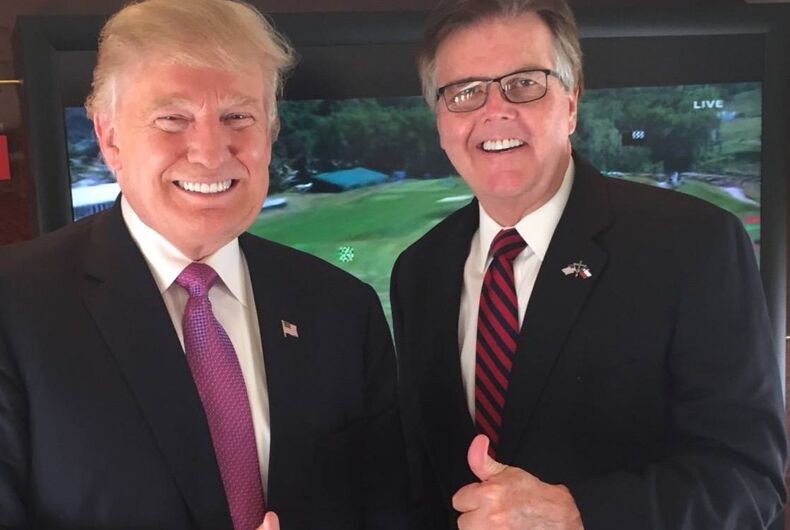 Texas Lt. Gov. Dan Patrick (R), who is 63-years-old, told Fox host Tucker Carlson on air Monday, March 23 that: “No one reached out to me and said, ‘As a senior citizen, are you willing to take a chance on your survival in exchange for keeping the America that all America loves for your children and grandchildren?’ And if that’s the exchange, I’m all in.”

The next day, Fox News host and reporter, Brit Hume, defended Patrick’s remarks saying it is “entirely reasonable” that older U.S. residents should be fine with dying of COVID-19 if it assures a better economy.

“The utter collapse of the country’s economy — which many think will happen if this goes on much longer — is an intolerable result” of mandatory social isolation, continued the 76-year-old Hume.

Not only does the premature mass reopening of commerce pose a potential death sentence to many of our seniors, but it also presents major health risks for younger people, especially those with other medical conditions such as high blood pressure, diabetes, heart and other organ problems.

Reports indicate that even young people without other medical complaints are turning up in hospital intensive care units hooked up to ventilators as a result of contracting the coronavirus.

“Adultism” refers to oppression against young people by adults, and “ageism” against elders by youth and by adults.

Adultism, as defined by John Bell, includes “behaviors and attitudes based on the assumption that adults are better than young people and entitled to act upon young people without their agreement. This mistreatment is reinforced by social institutions, laws, customs, and attitudes.”

Within an adultist society, adults construct the rules, with little or no input from youth, which they force young people to follow.

While elders in most countries were once considered as wise and treasured members of their communities, in many contemporary societies, older people are often marginalized, stripped of their rights and responsibilities, their dignity, their voice, and the power over their lives.

“First, the advent of the printing press was responsible for a major change in the status of elders,” he wrote. “The culture, tradition, and history of a society or tribe now could be repeated innumerable times, in exact detail through books, and the status and power elders once had as the village historians was greatly reduced and, in many cases, eliminated.”

“The second major development in society that led to a shift in attitudes toward the elderly was the Industrial Revolution. The industrial revolution demanded great mobility in families — to go where the jobs were. In light of this new pressure to be mobile, the extended family structure (with grandparents in the household) was less adaptive. Older people were not as mobile as younger people.”

An early writer on the topic of oppression toward older people is Robert Butler who defines “ageism” as: “A process of systematic stereotyping of and discrimination against people because they are old…. Old people are categorized as senile, rigid in thought and manner, old fashioned in morality and skills…. Ageism allows the younger generations to see older people as different than themselves; thus they subtly cease to identify with the elders as human beings.”

Margaret Morganroth Gullette describes ageism as “the infliction of suffering by the mere fact of birthdate.”

In terms of age, some of the most creative and successful thinkers have been at all stages of life, from very young to extraordinarily old.

I recently commented on a Facebook posting, and in response, someone called me a “damned Boomer.” Well, I say, damned right I’m a Boomer, and a proud one at that.

We “damned Boomers” served proudly in our military alongside other generations.

We worked tirelessly in the service of civil and human rights, in ensuring the rights of women to control their own bodies, in protecting and defending lesbian, gay, bisexual, and transgender people, in protecting the separation of government and religion, in protecting our environment, and in attempting to bring down the rate of gun violence.

We designed and built your buildings. We cleaned your offices and homes. We cared for you in doctors’ offices and hospital rooms, and we defended you in the courtroom.

We collected your garbage and prepared your taxes, laid your roadways, paved your sidewalks, and constructed your bridges.

We wrote your books, taught you how to read and write, add and subtract. We helped you learn the names of the states and their capitals, inspired your enthusiasm and your critical thinking, and trained you in the fields you were to enter.

We manufactured your automobiles, planted and picked your vegetables, and shipped your products to market. We reported the news, and gave you solace in good times and bad.

We cleaned your asses and collected your soiled diapers, and we gave you a shoulder to cry on as we wiped away your tears.

And many of us continue to carry out these essential tasks today.

For some members of following generations, we have always had and maintained your respect. Others, unfortunately, consider us as mere dinosaurs and inconveniences as we maintain positions they covet for their career advancement.

How convenient it is to justify opening the economy by placing our seniors at higher risk for death. How insidious it is to place economic considerations far above the physical welfare of actual living human beings.

But this is quickly becoming the norm in these terrifying Trumpian times in which the President of the United States rose to power by dehumanizing undocumented immigrants who attempted to escape rape, kidnapping, poverty, and death in their home countries.

The times in which the President of the United States rose to power by attacking the integrity, humanity, and honesty of women who called him on his rampant misogyny.

The times in which the President of the United States rose to power demonizing all members of U.S. Muslim communities and others throughout the world, and by defining all Jews as ethnically connected to Israeli Prime Minister Benjamin Netanyahu.

The times in which the President of the United States rose to power by mocking a reporter with a disability, and the residents of supposed “shithole countries,” all of which are majority populations of color.

The times in which the President of the United States rose to power by labeling the mainstream media as the “lamestream media,” and attacking them as “the enemy of the people.”

In his call to reopen the economy and to fill the churches this Easter Sunday, Trump has added all seniors to his tyrannical mix of disposables. It seems the only people he considers worthy of life include primarily relatively young (up to early middle age) white Christian heterosexual cisgender U.S. native born able bodied and preferably politically conservative male Republicans.

All others be damned with you.

Here’s one shortage you didn’t expect. Shelters are running out of dogs & cats.