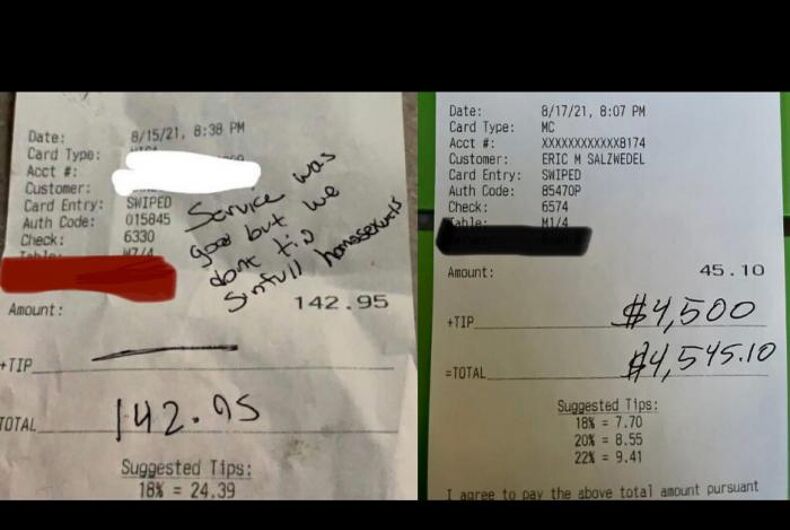 A copy of both receipts left for the insulted waiterPhoto: Eric Salzwedel/Facebook

A petty customer stiffed a waiter in Madison, Wisconsin. Instead of a tip, the Loving Christian™ left behind a misspelled note that said, “Service was good but we don’t tip sinfull homosexuals.”

But when news about the hateful diner hit social media, the internet decided to cover the tip – and then some.

Related: This restaurant’s response to a waiter’s anti-gay slur was sheer perfection

Eric Salzwedel, who is behind the Do Good Wisconsin group, heard about the incident and posted a photo of the receipt/note and the response was immediate. The group was born out of a Facebook page that highlighted “do-gooders” and surprised people with small gestures of kindness like unexpectedly paying for someone’s coffee or gas.

“To the folks who felt it was necessary to write this hateful note and not tip,” he posted in a follow-up post with another receipt lying next to the old one. “Don’t worry me and about 250 others will cover the tip for you.”

Salzwedel later confirmed that he made sure it was the same waiter.

“There’s a lot of opportunities every single day we wake up and we go out that we can either make a positive difference in the lives of people we run into or we can make a negative impact on people we run into every day,” Salzwedel said.

Earlier this year, a Maine-based TikTok star raised over $10,000 for the LGBTQ community in honor of a gay waiter who was discriminated against by people he was serving at a restaurant.