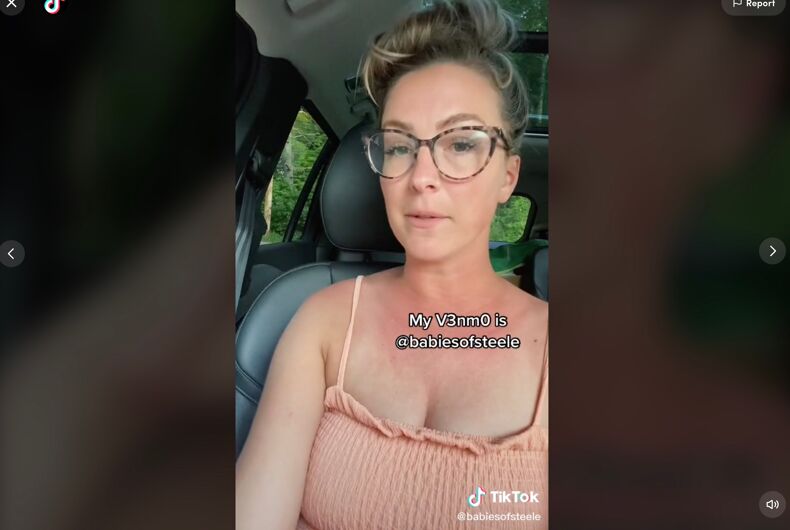 A Maine-based TikTok star raised over $10,000 for the LGBTQ+ community in honor of a gay waiter who was discriminated against by people he was serving at a restaurant.

The waiter, who has chosen to remain anonymous, received a religious pamphlet in place of a tip from two different customers in the same day. When word of the incident reached TikToker Meredith Steele, whose friend works with the waiter, Steele appealed to her almost 500,000 followers to Venmo her money to give the waiter the tip he deserved.

Related: A gay couple was ordered to take down their pride flag & now their neighbors are flying them too

“As a general life rule I try not to make videos when I’m angry,” she said in the June 7 video, “but if you can’t tell by my chest right now I’m fuming.”

She went on to explain that she has worked in restaurants for fifteen years and could not believe what had happened.

“I don’t care who your God is,” she said. “If you do that, you’re an asshole. And you can justify it however you want, but it’s not in your book.” She then asked followers to “Fill the fuck out of my Venmo so I could fill his apron with money.”

And they did. The donations poured in, some people giving just a few cents and others giving larger sums. Steele has not disclosed the amount she gave directly to the wronged waiter, but there was enough that she was able to also give $10,500 to LGBTQ+ advocacy organization Equality Maine.

Reply to @downbytheseaside Donated to Equality Maine this morning, thank you all so much for contributing

Steele also spoke with the outlet, declaring, “Regardless of your personal opinion, someone’s sexual orientation has absolutely nothing to do with how they do their job. It’s never your time or place to make a comment like that. It infuriated me.”

According to ABC, Steele has a history of giving money away and spent last Christmas season surprising strangers with donations.

Steele posted an emotional video to TikTok after delivering the money to the waiter.

“He was really grateful,” she said, “and I just want to tell you guys how grateful I am…sometimes people think TikTok’s a pretty stupid app and it can be, but it also was really cool to see how you guys can change the whole earth in little 25 cent increments.”