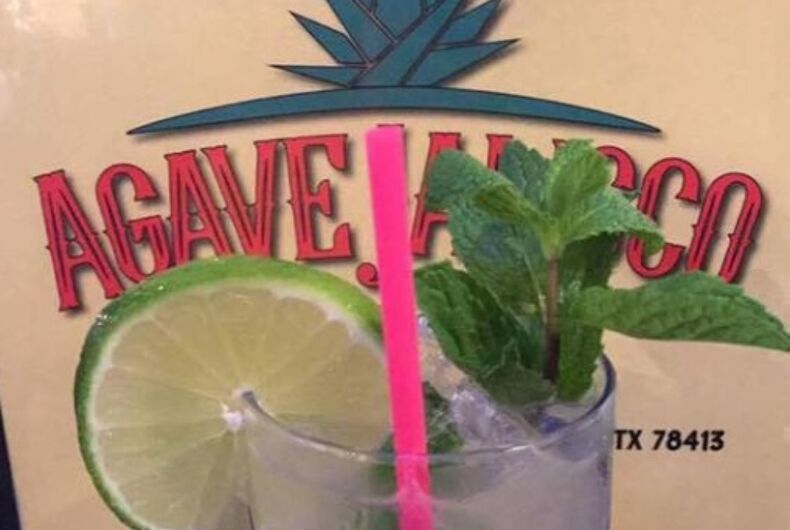 A restaurant in Texas fired an employee for slinging an anti-gay slur when a gay couple came to the restaurant.

Sandra Clement was at the Agave Jalisco Mexican Restaurant in Corpus Christi this past Thursday with her son Miguel and his boyfriend.

Her son and his boyfriend “exchanged a hug as they entered the restaurant and a male employee pointed at them while talking to some female employees seated at a table and screamed ‘jotos,'” Clement wrote in a Facebook post that has since been deleted.

“Joto” is an anti-gay slur in Spanish.

She said that the other employees laughed as the employee started singing “jotos” repeatedly, walking to the kitchen.

Related: ‘Christian’ family leaves lesbian server a nasty note instead of a tip

It took less than a day for the restaurant to issue a public apology.

“We… know the seriousness of this issue, and want to state that we do not condone or accept this type of homophobic behavior,” the statement said.

“We are writing this statement now as a public apology the Clement family, Miguel Clement, and his boyfriend. We here at Agave Jalisco are truly sorry for what happened that day, and will strive to always make Agave Jalisco a loving, accepting business, free of judgement. We will make sure this never happens again.”

The employee has been fired, and the rest of the staff will have to undergo sensitivity training.

“Our son, his boyfriend, and our family applaud Agave Jalisco for taking swift action in addressing the unfortunate incident,” Clement wrote in a later Facebook post.

She could be the first trans woman in the U.S. Congress. So we talked to her.

Vatican admits Pope lied about meeting anti-gay clerk Kim Davis. He knew who she was.