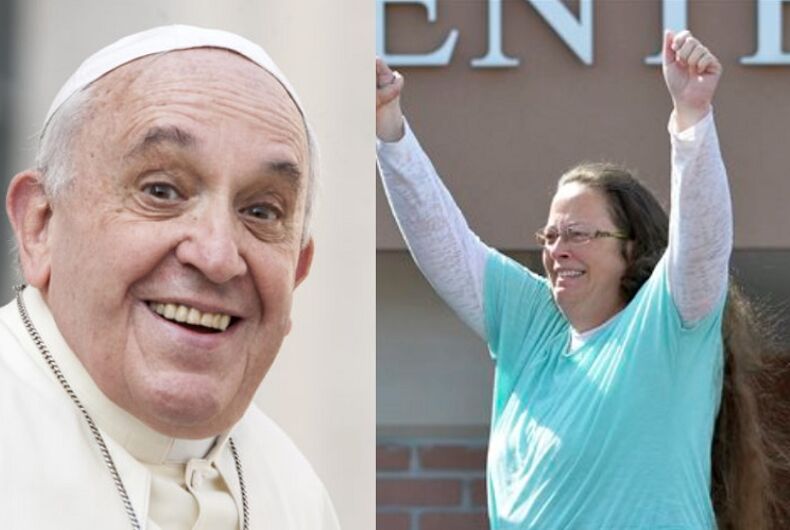 Kim Davis, the infamous Kentuckian who refused to issue marriage licenses to same-sex couples and was ultimately jailed for ignoring a court order to do her job, had a secret private audience with Pope Francis on September 23, 2015.

While the Vatican originally denied the meeting took place, they eventually confessed that it had, but said the Pope didn’t know who the lawbreaking anti-gay zealot was. Now the Holy See is admitting that was a lie too.

The papal team originally explained that the only “real audience” the Pope had during his visit to Washington, DC was with a gay man and his partner, whom Francis knew from his time in Argentina. The Vatican essentially confirmed the meeting after Davis’ lawyers at the far right legal hate group Liberty Counsel leaked a photograph to the media of the two together to bolster their client’s claim.

The Vatican spokesman, the Rev. Federico Lombardi, downplayed the 15 minute audience, saying “Such brief greetings occur on all papal visits and are due to the Pope’s characteristic kindness and availability.”

Vatican officials told news outlets that “the meeting with Kim Davis irked Pope Francis,” saying that he didn’t know the specifics of Davis’ situation before the meeting.

Now, new details have emerged claiming the Pope knew about Davis’ anti-LGBTQ history the entire time – and, in fact, had told her to “stay strong.”

“What is certain is that the Pope knew very well who Davis was, and he and his close collaborators had approved the private audience,” Archbishop Carlo Maria Vigano, the Vatican’s former ambassador to the United States from 2011-2016 who arranged the meeting, claimed in a three-page letter gone viral.

Vigano claims he was summoned to Rome after the public relations debacle and expected to be reprimanded. Instead, he says Pope Francis praised his handling of the papal visit.

The Vatican is attempting to push back against Vigano’s allegation, but to do so, they’ve been forced to admit they lied when they claimed the Pope didn’t realize who she was. He was fully briefed of her history and personally approved of the meeting after vetting by his staff.

“He told me before he left, he said ‘stay strong.’ That was a great encouragement,” Davis said of the pope during an ABC interview in 2015. “Just knowing that the pope is on track with what we’re doing and agreeing, you know, it kind of validates everything.”

Related: Pope Francis tells parents not to reject gay kids, but send them to therapy to ‘see how things are’

Rev. Federico Lombardi and his English-language assistant, the Rev. Thomas Rosica, issued a joint statement that denies the Pope praised Vigano during his meeting in Rome. In the statement, Rosica transcribed notes from a meeting held after the audience with the head of the church.

Rosica’s notes indicate that Vigano told the men that Pope Francis chastised him for “deceiving” him about the meeting and not telling the church hierarchy that she had been married four times.

In his part of the statement, Lombardi says Vigano initiated the meeting and should have known the public relations fiasco it would cause. He admitted that higher-ups in the church were briefed before the meeting – as was the Pope – but that they weren’t told of the furor it would cause.

“For the first time in three years, the same Press Office officials of the Holy See, who lied about the private meeting, have now confirmed what Liberty Counsel has been stating: there was a private meeting with Kim Davis that was approved by the Pope who was aware of her religious stance regarding her refusal to issue marriage licenses that conflicted with God’s definition of marriage,” said Mat Staver, Founder and Chairman of Liberty Counsel.