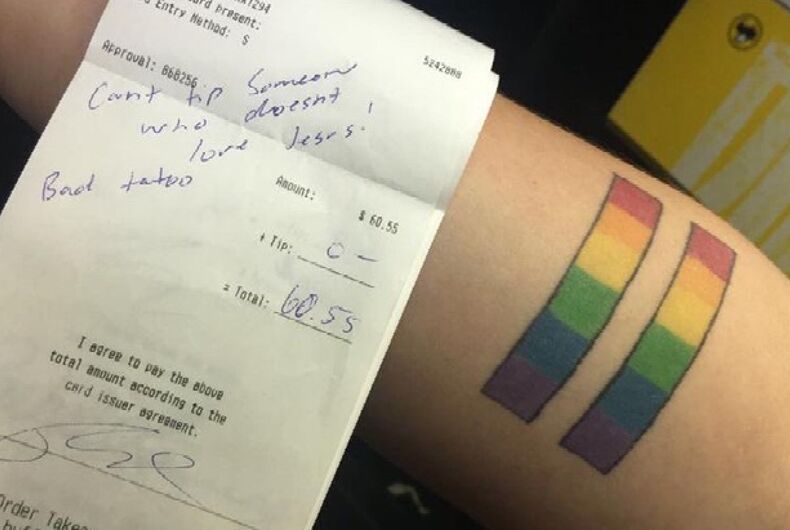 Samantha Heaton, a server at a Buffalo Wild Wings in Rockport, Illinois, was shocked when she found a nasty note from a “Christian” family instead of a tip after they left.

“Can’t tip someone who doesn’t love Jesus!” the note read with “Bad tatoo” [sic] added at the bottom. Heaton has a rainbow colored equal sign tattooed on her arm.

“I went above and beyond for this couple, and for them to leave that (note) kind of hurt,” Heaton told the Rock River Times. “Like, I have bills to pay too.”

Neither religion nor sexuality were mentioned during the family’s time in the restaurant as they racked up a $60 bill. Heaton should have received a $12 tip instead of hypocritical nonsense scrawled on the receipt.

“Someone asked me the other day if I would go back in time and get the same tattoo and I said, ‘No I would get it bigger,” she said.

Heaton seems to be taking the slight in stride, saying her biggest worry is what kind of an example, these “loving Christian parents” are setting for their children.

“The kids are going to be under the impression that it will be OK to discriminate against anybody,” she said.

After co-worker Joelle Nicole Maish snapped a photo of the receipt and Heaton’s tattoo and posted it on Facebook, the story has quickly started spreading. So far, no one from Buffalo Wild Wings’ corporate office have made a statement.

I would just like to say that being gay does NOT MEAN you don't believe in God or Jesus. And people who are "religious"…

PHOTOS: Queer families in all their glorious diversity take over P-town

The DC Metro banned a Milo Yiannopoulos ad. Now the ACLU is suing.